VS Battles Wiki
Register
Don't have an account?
Sign In
Advertisement
in: Tier 4, Tier 4-A, Characters,
and 38 more 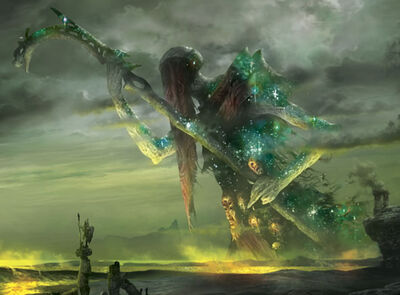 When mortals die, their souls must cross the Rivers That Ring the World to reach the Underworld. The shrouded god Athreos is their guide, ferrying the dead to their ultimate rest. Silent, bent, and tattered, he patiently fulfills his role. Athreos is never without his signature staff, a gnarled length of dark wood. When the dead arrive on the shores of the Rivers, he lays it across the water to transform it into a barge. In his role of easing the passage from life to death, he is associated with white and black mana. The custom on Theros is to craft a funerary mask of clay for the newly dead. In this way, the identities of the deceased are "framed" for Athreos, so that he can mark their proper passage.

Powers and Abilities: Superhuman Physical Characteristics, Immortality (Types 1 and 8, Gods are reliant on people's belief in them), Magic (Master White and Black mana user), Abstract Existence (Type 1, Gods exist as the abstract embodiment of concepts), Incorporeality, Intangibility (Gods are able to become tangible and intangible at will), Multilocation (Gods manifest as living constellations), Regeneration (Low-Mid, Gods are able to regenerate from being split in half), Clairvoyance (All Gods possess a form of clairvoyance that allows them to keep constant watch over the Mortal Realm or individual mortals), Self-Sustenance (Types 1, 2, and 3), Flight, Dimensional Travel (Gods are able to freely traverse the boundaries between the Mortal Realm, Nyx, and the Underworld), Shapeshifting (Gods are able to freely decide how they appear in their physical form), Telepathy (Gods are able to communicate with mortals telepathically) Large Size (Types 0 to 6), Size Manipulation, Enhanced Senses (Gods are stated to have senses vastly better than mortals), Existence Erasure (All Gods possess the ability to erase mortals from existence), Invisibility (Gods are able to become visible and invisible at will), Creation and Life Manipulation (All Gods are able to create Nyxborn constructs as servants), Power Bestowal (All Gods are able to grant mortals boons that grant them supernatural abilities. Able to grant mortals the ability to manipulate the minds and memories of others as well as make them invisible to other Gods), Statistics Amplification (Can amplify the power and durability of those he grants boons to), Spatial Manipulation (The battle between the Gods was capable of tearing holes in the fabric that separates the Underworld and Nyx from the Mortal Realm), Perception Manipulation (Mortals without the boon of a God cannot properly perceive a God and even the spoken language of a God will make no sense to a mortal), Possession (All Gods are capable of possessing mortals as vessels), Healing (At least Low-Mid, All Gods are capable of healing up to and including restoring severed limbs), Precognition (Capable of Scrying), Resurrection (Able to bring the dead back to life by denying them entry to the underworld and returning them to the mortal world), Summoning, Resistance to Mind Manipulation, Memory Manipulation, Existence Erasure, Petrification (Unaffected by spending hundreds of years in the Underworld, which erodes memories, personality, and the physical form of things that reside within it, to the point that even if one escapes the underworld they will have no memory of it or their previous life as their memories remain in the Underworld), and Corruption (Residing in the Underworld can corrupt those within it into horrific monsters)

Attack Potency: At least Multi-Solar System level (Gods are depicted as living constellations consisting of an innumerable amount of stars with their physical versions being only the perception of the mortals. Should be at least as strong as Xenagos)