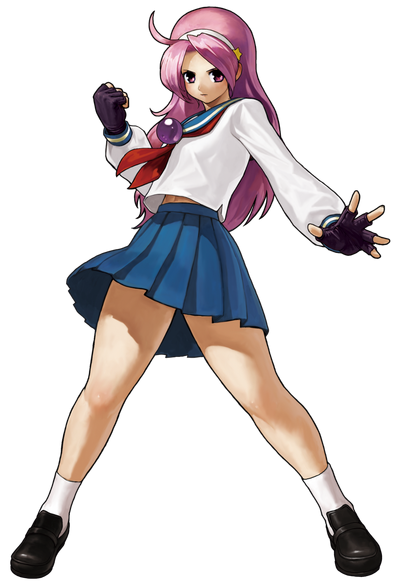 Athena Asamiya is a member of the Psycho Soldier team who made her debut in Psychic Soldier. She's a kind-hearted and polite Japanese schoolgirl and a famous pop star with psychic powers. Under the training of Chin Gentsai, she would normally use these powers to fight in the name of justice with her friend, Sie Kensou, who developed a crush on her. Her title is The Psychic-Powered Idol.

Attack Potency: At least Small City level+ (Via scaling to Sie Kensou. Is a member of his team and should not be far behind or above him in power)

Durability: At least Small City level+ (Took hits from characters on her level), higher with forcefields.

Stamina: High, can fight even while heavily injured.

Intelligence: Intelligent enough to have mastered many Psycho-Based Attacks.

Weaknesses: Athena is a helpless romantic. She gets distracted easily and does not train often because of her career as an idol.