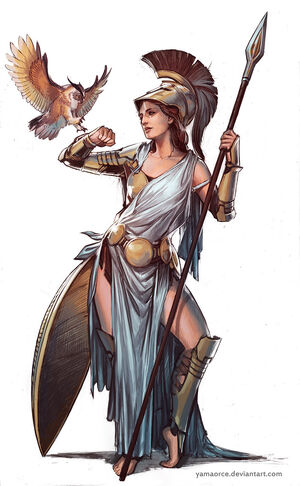 Athena is the Greek goddess of wisdom, handicraft, and warfare. She is the daughter of Zeus and Metis. Athens is named after her.

Age: At least thousands of years old (younger than most of the Olympians, except for Dionysus)

Powers and Abilities: Superhuman Physical Characteristics, Weapon Mastery, Immortality (Type 1 and 5), Shapeshifting, Transmutation (Turned Arachne into the first spider, turned medusa into a gorgon), Weather Manipulation (Sent a storm at Cape Kaphereos to destroy almost the entire Greek fleet), Teleportation (In one myth, when Hephaestus tried to consummate his marriage with Athena, she vanished from the bed), Telepathy (Implanted thoughts into Odysseus' head on his way to Troy), Dream Manipulation (Appears in Nausicaa's dreams), Status Effect Inducement (Made Tiresias blind), Power Bestowal (Gave Tiresias the ability to speak to birds), Resurrection (Brought Arachne back to life as a spider), Blessed (Could offer wisdom, fame and glory in battle. Blessed Diomedes so he could defeat Ares. Blessed Perseus so he could strike Medusa with an accurate blow), Creation (Created the first olive trees), Animal Manipulation (Created a golden bridle that Bellerophon used to tame Pegasus with no problems. Pegasus is a demigod winged horse).

Attack Potency:  High Universe level (Comparable to other Olympians. In one version of a story, killed and flayed a giant named Pallas. Fought in the Gigantomachy. Defeated Ares with a boulder)

Speed: Relativistic (Powerscaling from other Olympians)

Striking Strength: High Universal  (Should be comparable to the other Olympians)

Intelligence: She has thousands of years of battle experience and is the goddess of wisdom.

Weaknesses: She cannot reverse her curses as she could not reverse Tiresias blindness

Retrieved from "https://vsbattles.fandom.com/wiki/Athena_(Myth)?oldid=4426081"
Community content is available under CC-BY-SA unless otherwise noted.