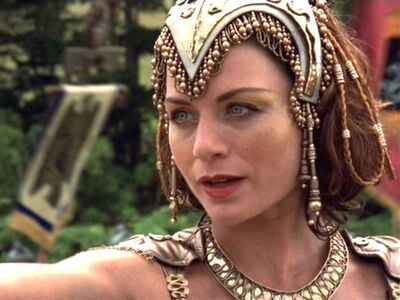 Athena, the Goddess of Wisdom, Warfare, and Weaving is a reccuring character on Young Hercules, Hercules: The Legendary Journeys and Xena: Warrior Princess. Athena is more understanding and caring member of the Olympians and in return she's gained much respect from them. However, this did not get in the way of attempting to kill Eve to prevent the Twilight of the Gods. This does eventually lead to her death at the hands of Xena.

Attack Potency: Small Building level (She is one of the most powerful of the Olympian Gods and she is equally as powerful as Hades and Poseidon themselves, mortally wounded Xena) | Unknown

Standard Equipment: Her sword that can also act as a flamethrower

Intelligence: Very wise and knowledgeable. She is the Goddess of Wisdom and seemed to have taken Zeus' place as the leader of Olympus after his death.

Retrieved from "https://vsbattles.fandom.com/wiki/Athena_(Hercules_%26_Xena)?oldid=4107216"
Community content is available under CC-BY-SA unless otherwise noted.