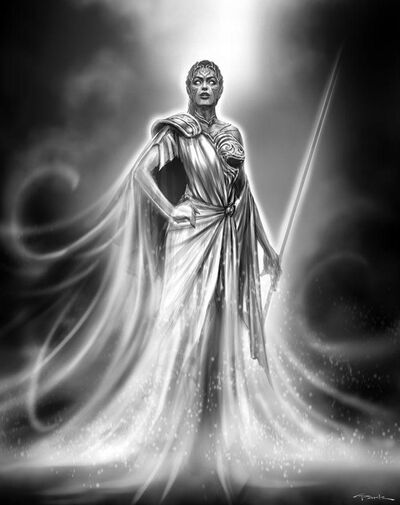 Athena is the goddess of war and Wisdom, and the deuteragonist of the God of War series, mostly appearing as an ally of Kratos.

Of all the Gods on Mount Olympus in the God of War series, Athena is arguably the least selfish and is in fact, very noble. As displayed not only by her deep love for her people and her horror of Ares' siege on Athens but her deep concern and love for the rest of humanity - as in God of War III she states that she intends to "liberate" mankind with the power of hope.

Upon her death, however, Athena ceased to have these traits as she ascended to a higher realm and ended up being corrupted by the powers contained within said realm, and began to plot to take over the lower realm.

Attack Potency: At least Universe level, likely Universe level+ to Low Multiverse level (Was able to temporarily overpower God of War 2 Kratos, although he was trying not to kill her. Her telekinetic abilities were able to pull Kratos back while he had the powers of Pandora's Box. Portrayed as comparable to her brother Ares in the novels. Is at least equal to and possibly superior to Helios)

Speed: At least Massively FTL+ (Should be comparable to her brother Ares)

Durability: At least Universe level, likely Universe level+ to Low Multiverse level (Comparable to Ares, took a while to die after being impaled by the Blade of Olympus)

Range: Standard melee range, likely higher with energy attacks and manipulation; at least hundreds of meters if she is capable of assuming Giant Size

Intelligence: She has been described as the embodiment of wisdom. Has manipulated Kratos and several other Gods through the events of God of War I, and Kratos once again in God of War III.

Start a Discussion Discussions about Athena (God of War)