VS Battles Wiki
Register
Don't have an account?
Sign In
Advertisement
in: Tier 1, Tier Low 1-C, Tier 1-A,
and 31 more 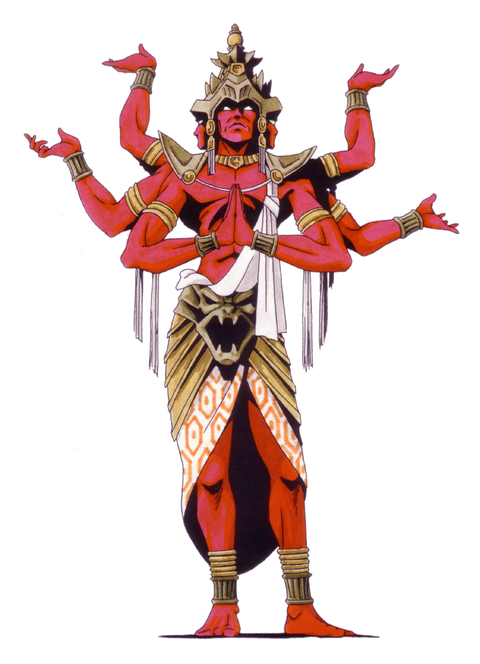 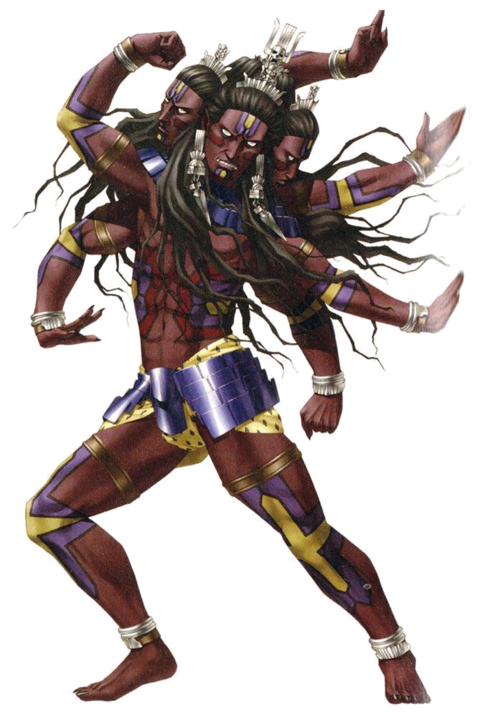 Asura, also known as Asura Oh (アスラおう, Asura Ō) is the Hindu God of Fire and Light, and the king of the group of violent deities likewise known as the "Asuras." He is an aspect of, though ultimately distinct from, Vairocana, the Supreme God of Vajrayana Buddhism, being identified as the the shape which the latter assumes when acting as a god of war, and thus inheriting much of his higher self's characteristics, such as a deep connection to the universe itself, which he is said to personify and sustain through his existence.

Though he currently takes the form of a deity from Hinduism, Asura claims to have once been Ahura Mazda, the Supreme God of Zoroastrianism, who was demonized into a god of war and violence alongside his cohorts and cast down from his lofty position, and in order to return to his former self, Asura has frequently taken arms with the Demon Lord Lucifer, in particular during the events if Shin Megami Tensei I, where he assists him during the seige of the Cathedral and hopes to bring about his master's desired world of freedom.

Classification: Demon, Hindu Deity, God of Fire and Light, King of the Asuras, Servant of Lucifer, Demonization of Ahura Mazda.

Attack Potency: Low Complex Multiverse level (Equal to Michael in power, with the two being so perfectly matched during the events of Shin Megami Tensei I that Tao Shang Lao Jun states the conflict for the Cathedral will not end as long as neither of them are stopped by an outside force. Formed a seal that could only be broken by the Angel Ring, a weapon created by the fusion of Uriel, Gabriel and Raphael) | Outerverse level (Exists as an archetype, a shapeless, fundamental unit of the collective unconscious inhabiting the realm of Atziluth, beyond the concept of dimensions entirely, and yet to be shaped into a lower state by the thoughts and emotions of humanity)

Speed: Omnipresent (Stated to exist as both the universe itself and the pillar which supports it, existing within the smallest things) | Omnipresent (Those who inhabit the unconscious, archetypal world are untied from space and time and diffused throughout all of existence, experiencing "all dimensions and possibilities")

Intelligence: Supergenius, likely Nigh-Omniscient due to his nature as overseer and personification of the universe.

Asura Roga: Being demons whose existence is inherently tied to war, destruction and violence, the Asuras have the ability to detach fragments of their own bodies and send them into the air in the form of "parasites" that infect nearby individuals with an uncontrollable frenzy that vastly erodes their sanity and reduces their ability to think in strictly logical terms, driving them into a state of homicidal mania where "Survival of the fittest" is given priority. Since Asuras, as all demons, are entities of pure thought and information instead of physical beings, the parasites generated by them have no physical vectors and bypass all material defenses, acting as energy constructs that are undetectable through technology and directly attach to a person on a mental level.