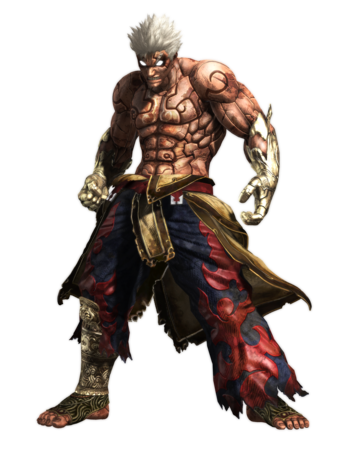 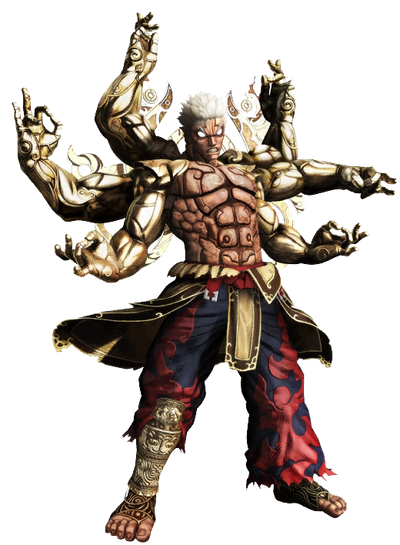 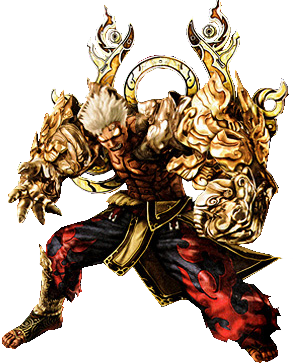 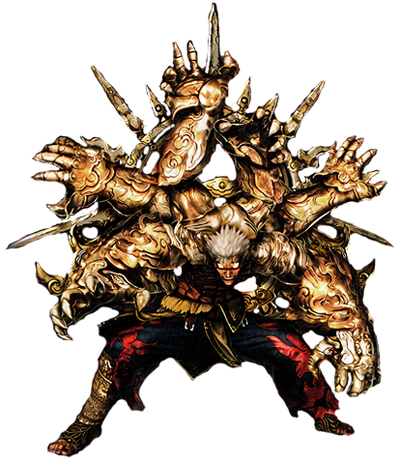 Asura (アスラ, Asura) is the main protagonist and titular character of the action beat 'em up game Asura's Wrath. He was one of the Eight Guardian Generals who served the Shinkoku Army and the Emperor to fight against the Gohma, until he was framed and betrayed by his fellow demigods, had his wife killed, his daughter taken, and banished to Earth. His Mantra Affinity is Wrath.

Attack Potency: Multi-Continent level (Heavily damaged Vlitra to the point of suppressing it for a long time) | Large Planet level (Can match Base Yasha and fight Deus) | Large Star level (Defeated Sakra Devanam Indra Deus after he merged with the Karma Fortress) | At least Large Star level, possibly higher (Tore through Base Chakravartin's energy barriers) | At least Large Star level, possibly higher (Became much more powerful than his previous forms, fought toe-to-toe with the Vlitra Core along with Yasha) | Multi-Solar System-level (Destroyed multiple planets and stars with casual attacks, shattered Chakravartin's Golden Form in a single blow) | At least Multi-Solar System level, possibly higher (Matched and defeated Chakravartin's Creator form while he was in his base form and at his highest shown levels of rage)

Stamina: Extremely high (Capable of fighting even after taking significant amounts of damage and losing his arms, able to ignore almost any wound)

Standard Equipment: His four extra arms and the Mantra Reactor.

Weaknesses: Tends to rush head-on in combat without a plan. Before having the Mantra Reactor, Asura's mantra was too fierce for his body to contain, potentially killing him with his own power. As Wrath Asura, his body becomes unstable and cannot contain the sheer volumes of Mantra his anger generates which can cause gradual decay and eventual death; attacking in this state causes more harm to Asura than his enemies. While Asura can resurrect himself, this takes time ranging from several hours to even thousands of years. In addition, Asura may resurrect in a damaged state

Note: This Asura should not be confused with the other Asuras.