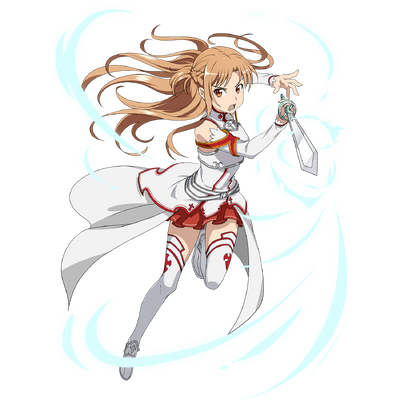 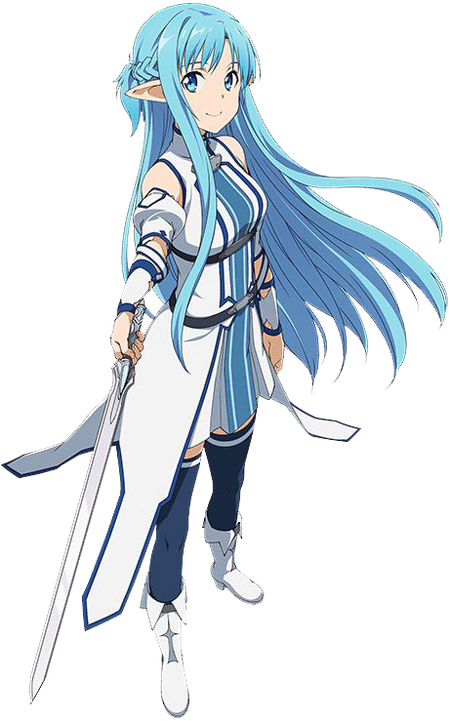 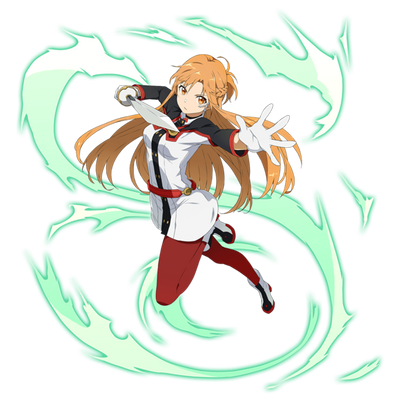 Prior to being trapped in the game, Asuna was known to be somewhat stuck-up and proud of her position in a well-to-do family. However, she was terrified by the thought of being unable to leave the game, but eventually found the resolve to take charge of her own fate, recklessly slaying hordes of monsters on her own and leveling up at a rapid pace to the point of gaining infamy within the community.

Nicknamed "The Flash" for her nearly unparalleled speed, she crossed paths with Kirito numerous times, eventually becoming one of his closest allies and later his betrothed.

Skilled Swordswoman and Markswoman, Skilled Hand-to-Hand Combatant, Enhanced Senses (via Hypersense and Distinguish) in AR/real life. In VR she has everything from her SAO key

Same as before, with the addition of Superhuman Physical Characteristics, Statistics Amplification (Sword Skills amplify the user's speed and power, with the downside of leaving some aftercast delay), Enhanced Senses (via Hypersense and Distinguish), Regeneration (Mid-low in-combat. Low-mid over time (All VR avatars can regenerate entire lost limbs, however it takes time, thus it is not combat applicable). Note: The stronger the enemy is, the less effective the in-combat regen is), Statistics Reduction (via continuous powerful attacks, such as multi-hit Sword Skills or various critical hits), can Silence a player which renders them unable to speak (via Debuff Crystals), Paralysis Inducement that also forces opponents to drop their weapons (via Debuff Crystals), Status Effect Inducement (via Debuff Crystals), Status Effect Nullification (via Antidote Crystals, Potions, and Meditation), Healing (At least Low-Mid, via Healing Crystals and Potions. Healing Crystals act instantly while Potions work over time), Teleportation & BFR (via Teleport & Corridor Crystals), Immortality (Type 2), Limited Reality Warping (via Incarnation. Allows the user to change the world to an extent via their willpower or imagination. For those who are not conscious or adept with this ability, it is primarily used to increase the chances of winning a fight against stronger opponents or create miracles not possible normally. All virtual avatars are capable of Incarnation, however only those who recognize this ability can consciously use it to their advantage), Resistance to Pain (All virtual reality avatars have a pain absorber, which lessens the amount of pain one feels to negligible amounts, even with injuries such as decapitation)

Same as before (though before New Aincrad, ALO didn't allow the use of Sword Skills), with the addition of Flight (Can fly with her ALO Avatar's wings for ten minutes before being forced to land pre-New Aincrad. Post-New Aincrad she's able to fly for an unlimited amount of time), Healing (Undines have the ability to heal other players), Magic (Mostly support based such as healing and buffing), limited wall running (via being a lightweight race)

Superhuman Physical Characteristics, Statistics Amplification, Enhanced Senses, Master Swordswoman, Regeneration (Low-Mid), Healing, Limited Reality Warping (via Incarnation. Allows the user to change the world to an extent via their willpower or imagination. For those who are not conscious or adept with this ability, it is primarily used to increase the chances of winning a fight against stronger opponents or create miracles not possible normally. All virtual avatars are capable of Incarnation, however only those who recognize this ability can consciously use it to their advantage), Magic & Creation (via Sacred Arts), Summoning, Elemental Manipulation, Light Manipulation, Geographical Manipulation

Greatly enhanced levels of all previous Alicization abilities, and including:

Regeneration (Mid via Incarnation. Comparable to Quinella & Star King Kirito), Immortality (Type 1. Lived for over 200 years in the Underworld alongside Kirito. Should be the same as Quinella, as Star Queen Asuna meant to eternally rule the Underworld) and Self-Sustenance (Types 1 and 2. Can survive without oxygen in the depths of space, and is also comparable to Quinella and Star King Kirito). Should also have all of Quinella's abilities (And most likely to a higher level of them), as she grew stronger within those 200 years while Quinella remained stagnant, and by default takes one of the Administrator positions, having rediscovered and cracked all of Quinella's secrets to reforge the Underworld.

Attack Potency: Athlete level in AR/real life (Comparable to Kirito and Eiji. Able to pick Kikuoka Seijirou off the ground by the collar with one hand). City Block level in VR (Comparable to Kirito. Can harm An Incarnation of the Radius) | At least Large Building level (Comparable to Kirito and other high level players) | Large Building level (Should still be stronger than the characters that defeated the GeoCrawler, a beast with the height of a house and the length of multiple houses) | At least Building level+ (Fought evenly with Alice. Alice stated that she was stronger than most Integrity Knights), Island level with Geographical Manipulation (Shook the Underworld. Her manipulation of the terrain can go into the horizon. Comparable to Dark God Vecta and Kirito when powered by the world) | Multi-Solar System level (Comparable to Star King Kirito, and helped him defeat the Abyssal Horror)

Intelligence: Asuna is a brilliant tactician as she was the Vice Commander of the strongest guild in Aincrad, the Knights of Blood Oath; leading the way against field bosses and raid bosses alike in the front lines. She is a masterful rapier user, to the point that she became known as "The Flash" for her speedy and dexterous strikes that even Kirito noted that he cannot follow. In addition, she always had the highest grades in school for most of her life, making her amazing academically, and she is quick to grasp concepts new to her, becoming adept at them within seconds. During her Star Queen years, she, alongside Kirito, has gained immense experience and knowledge in general as a engineer, ruler, politician, and swordswoman, and ruled an interstellar empire.

Weaknesses: Sword Skills have a slight aftercast delay at the end of them in exchange for increased power. If Asuna loses willpower, confidence, or imagination on succeeding in an event, Incarnation will not activate.

Incarnation: A secret skill passed down by Integrity Knights since ancient times, and one of the most important concepts in the Sword Art Online franchise. Incarnation refers to the ability to change the state of the world through pure willpower and imagination. This mainly includes creation, alteration, and destruction. It is the power which Sacred Arts derive from. Its effects are versatile, as the power has been used to wield invisible blades, create swords from the user's blood, transmute objects, increase the chances of an event happening, and much more. However, the power of an Incarnation ability can be matched by another Incarnation ability, and the use of Incarnation is mentally exhausting, requiring a lot of concentration and energy to perform. If the user is in a state where their will is not strong enough, they become unable to use Incarnation. There are a limited amount of people who can use Incarnation to its full potential, and much practice and experience is needed to be able to use it. This ability is most prominent in the Underworld, as this ability is one of that world's core mechanics. However this ability has also been shown multiple times throughout the series before the Alicization arc.

Outside System Skills (OuSS): As its name suggests, are skills that are the users own, unlike Sword Skills and magic that are provided for by the game engine.

Sword Skills (SS): A series of movements that allows the user to attack much faster than they normally could, but the movements required to perform the Sword Skill are fixed and cannot be canceled by the user after they begin performing it. Contrary to their name, Sword Skills do not have to be used with a sword. Also note that these may not be all of Asuna's Sword Skills, but simply most of the ones she has been shown to use. Cannot be used in Alfheim Online pre-New Aincrad (Can only use imitations).

Original Sword Skills (OSS): Sword Skills made by or is inherited by the user from another. It is done by recording the creator's movements while the skill is being done. It is very difficult as it requires the user to do it perfectly as speeds above how they normally do, at speeds of that of Sword Skills. Cannot be used in Sword Art Online (Old Aincrad).

Magic: Allows the user to use race-unique and Alfheim standard magic. Asuna, as an Undine is naturally inclined towards recovery-based magic and the water element but she also uses standard elemental magic to imbue her rapier with it. Alfheim Online (ALO) Asuna only.

Aiz Wallenstein (Is It Wrong to Try to Pick Up Girls in a Dungeon?) Aiz's Profile (Speed equalized, SAO Asuna)