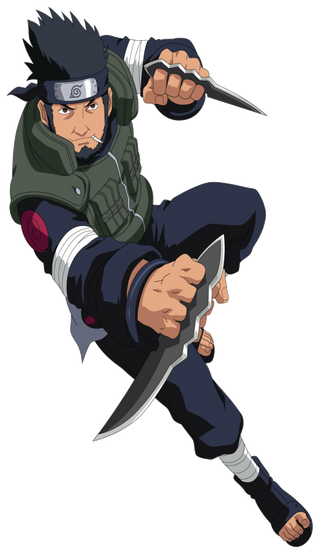 Asuma Sarutobi (猿飛アスマ, Sarutobi Asuma) was a Jōnin of Konohagakure's Sarutobi clan as well as a former member of the Twelve Guardian Ninja. He was also the leader of Team 10, which consists of Shikamaru Nara, Ino Yamanaka, and Chōji Akimichi.

-Futon (Wind Release): One of the five basic elemental nature transformations. It is performed by making chakra as sharp and thin as possible. Wind Release consists primarily of short to mid-ranged offensive techniques that combine brute force and keen precision to administer cutting and slashing damage. Wind techniques are usually performed by generating air circulation and can be enhanced through this method as well. Wind-natured chakra can also be channeled into blades to increase their cutting power and extend their range.

-Katon (Fire Release): One of the basic elemental nature transformations. It is performed by molding superheated chakra inside the stomach before releasing it via the lungs and mouth. Fire jutsu are usually mid-range and can cover a wide area. The force of the fire chakra is similar to an explosion as it can carve craters into rocks. There are also variants to this in the form of some mediums, such as the use of gunpowder, explosive tags, and chakra flow into a weapon.