VS Battles Wiki
Register
Don't have an account?
Sign In
Advertisement
in: Tier 5, Tier 5-A, Tier 1,
and 46 more 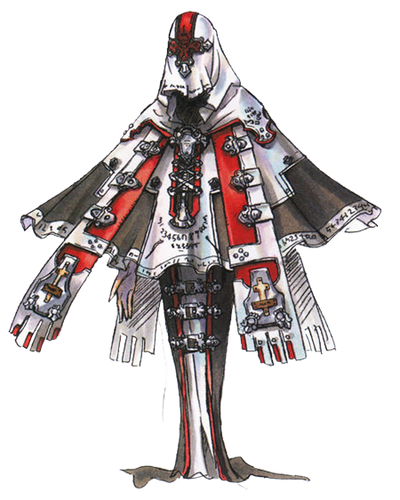 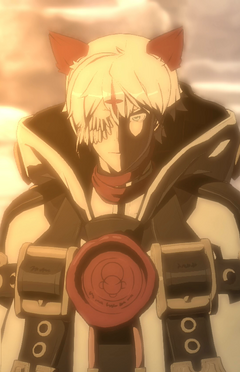 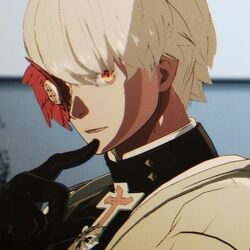 Asuka R. Kreuz (飛鳥＝Ｒ＝クロイツ, Asuka R. Kuroitsu), typically referred to as That Man and occasionally The Man, is a prominent character who was originally the central antagonist in the Guilty Gear universe, though he takes on a more supportive role during the events of Guilty Gear Xrd. He is the creator of the Gears and a sought-out target by most of the Guilty Gear cast. He is also knowledgeable in most of the events taking place in the series' continuity, dating all the way back to the Crusades, although other information is currently unknown. He has three (formerly four) servants: Raven, I-No, and Jack-O' Valentine (also formally Anji Mito), who frequently act on his behalf while he remains behind the scenes. The true extent of his power is unclear, but evidence suggests that he is one of the strongest characters in the franchise.

Name: Asuka R. Kreuz, That Man (Typically referred to as this)

Age: At least as old as Sol, but is currently reversing his age

Powers and Abilities: Superhuman Physical Characteristics, Genius Intelligence, Self-Sustenance (Type 1), Flight, Intangibility (Likely has to be activated), Can summon turrets to attack his opponent, Can create powerful Forcefields (Capable of holding a Dragon Installed Sol at bay), Time Freeze, Can either Time Travel or possesses knowledge of the future (Appeared in 2172 when I-No killed Sol's past self), Teleportation, BFR (Can send people to the Backyard), Energy Blasts, Statistics Amplification (Able to amplify allies' resistances), Status Effect Inducement (Able to bind others), Pocket Reality Manipulation (Able to create fields within backyard and Cube, which is a space within a dimension), Age Manipulation (Able to revert aging process), Magic, Elemental Manipulation (Of the Fire, Water, Earth, and Air varieties), Chi Manipulation (As "pinnacle of all magicians", he should be able to learn all 5 elements), Extrasensory Perception (Ki users can see people's flow of Ki), Information Manipulation (Able to create lifeforms from information and manipulate it), Non-Physical Interaction (Able to interact with souls and information), Creation (Able to convert energy into matter), Spatial Manipulation (Opened a cracked space as he used for Sol to enter within), Soul Manipulation (Harvested half of Aria's soul), Preparation, Power Nullification (Should be able to nullify Cradle's ability), Portal Creation (Can create portals to another dimension), Dimensional Travel, Reality Warping, Probability Manipulation, Law Manipulation, Physics Manipulation and Fate Manipulation via Cube (Can warp reality, make impossible possible, change fundamental truths and laws and choose whatever fate he wants, all on universal scale with Cube), Resistance to Power Nullification (Due to having magic beyond twelve steps), Extreme Cold and Cosmic Radiations, Massive Resistance to Information Manipulation and Transmutation (Able to withstand Backyard which has virtually infinite information, which rewrite someone's information to something else), Material, Spiritual and Mental attacks (Able to withstand the Backyard without any difficulty, which assault's one's body, mind and soul)

Attack Potency: Large Planet level (Casually stomped a partially transformed Sol. Then, even after Sol fully transformed, Asuka was still able to put up a good fight against him unscathed), up to Low Complex Multiverse level with Preparations (Created the Cube, a structure which can influence the real world on a universal scale. Wields the Tome of Origin, that allows him to control the higher dimension of the Backyard). Able to ignore conventional durability in some ways.

Speed: At least Relativistic+, likely higher (Can easily keep up with the likes of Sol without issue)

Lifting Strength: At least Class P (Comparable to Sol, who can match Justice)

Stamina: Extremely high. Able to fight his equal for long periods of time.

Range: Standard melee range, thousands of kilometers with attacks, Low Complex Multiversal with teleportation (Retrieved Sol from the Backyard after his fight with Valentine, seemingly from his own private realm)

Standard Equipment: His outfit, a tome similar to the one carried by The Sage/Original Man, a quill-like blade used for runic magic, Proteus Universe x2 used for light magic.

Intelligence: Genius in various scientific and magical areas, a prodigy in his human life and knows more than almost anyone else in the entire story.

Weaknesses: Is currently reversing his age for unknown reasons.