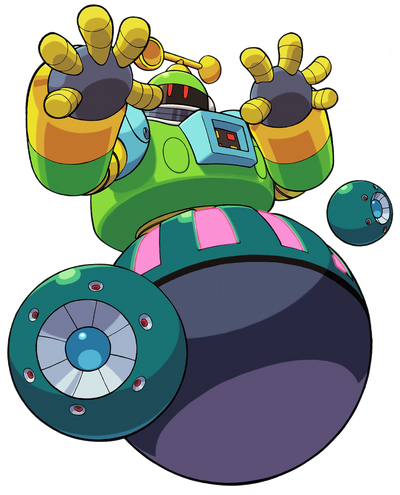 Astro Man is a Robot Master originally created to work in a planetarium until he was modified by Dr. Wily for combat purposes. Despite his modest, shy, and meek nature, he is posted to protect one of the outposts maintaining the barrier around Wily Tower, serving as a significant obstacle to Mega Man's attempts to stop the scientist.

Powers and Abilities: Superhuman Physical Characteristics, Self-Sustenance (Types 1, 2 and 3), Invisibility, Can generate holographic clones of himself to confuse his foes, Can pull meteors from space to bombard his enemies and direct his orbs around to bludgeon foes

Stamina: Limitless due to being a Robot Master.

Intelligence: Astro Man is ultimately a cowardly and modest robot, spending much of his battle with Mega Man hovering out of his immediate reach and remaining hidden with his ability to turn invisible and create holograms. Nevertheless, he proves to be a significant challenge, keeping his distance and bludgeoning his foes with his orbs while bombarding his foes with meteors.

Weaknesses: Shy, modest and somewhat cowardly, homing weaponry is especially effective against him.