VS Battles Wiki
Register
Don't have an account?
Sign In
in: Characters, Female Characters, Visual Novel Characters,
and 33 more 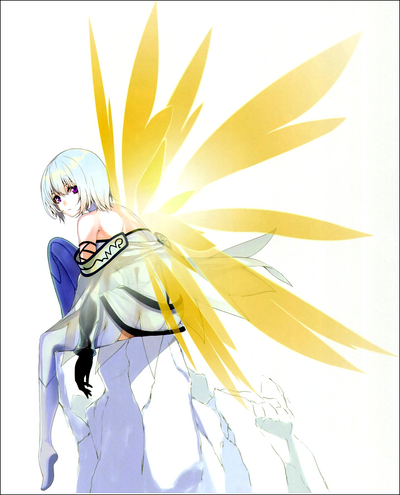 Astaroth, commonly referred to as Ast, is one of the main heroines of Shinza Bansho's Paradise Lost.

Ast is one of three biological weapons known as a Dust Angel alongside the King of Sin and the King of Crawling Insects created by Nerose Satanael, her title being known as Criminaltores and the Demonic Mirror.

A being who is treated more as a device than a weapon with no will and emotion, Ast was treated primarily as a "doll" of sorts to some characters like Know Christ, making her no different from the Angels Satanael created. After interacting with Know and replicating his memories during one moment, Ast later started to slowly gain feelings and emotions of her own, a heart in an angel with free will that Satanael has aimed for in his plan to reach the "true Zoar".

Powers and Abilities: Superhuman Physical Characteristics, Immortality (Type 1), Enhanced Senses (Can sense the adrenaline rate and heart beat of others), Higher Dimensional Manipulation and Energy Manipulation (All Angels and Anti-Angels manipulate Quintessence, a fifth DNA base embedded in them that allows them to draw upon energy from higher dimensions of the Sephirot and the Abyss formed from Muzan's Law), Mind Manipulation, Information Manipulation, Memory Manipulation and Power Mimicry (Can manipulate the mind of any living being and replicate their information and memories through direct contact or by merely seeing and hearing them), Chain Manipulation (Can create chains made of photons to completely bind her target with Sarial), Attack Reflection, Deconstruction and Flight (with Samyaza), Existence Erasure (Can generate white light that erases anything in its path with Azazel), Spatial Manipulation and Dimensional BFR (Can manifest a tornado around her that distorts space and sends anyone or anything caught in it to another dimension with Raphael), Energy Projection (Can shoot a torrent of Mana that swallows everything in its path to ruins with Michael), Forcefield Creation and Gravity Manipulation (Can shoot bullets of light that, upon hitting the target, creates a forcefield around them and crushes them with several thousand G's), Invulnerability (Can only be affected by Sin/Mana or an energy source similar in potency including hax such as Raphael's BFR which was noted to be useless against Belial due to Ast's sin not being on his level), Sense Manipulation and Summoning (Can summon meteor showers that target ones nerve areas with Gabriel), Purification and Transmutation (Can cleanse away Sin, higher dimensional energy from the Abyss which is a manifestation of Muzan's Law and can turn anyone or anything into a pillar of salt via Netsiv Melakh), Clairvoyance and Precognition (Can see into the past and future), Matter Manipulation and Space-Time Manipulation (Can create an elementary particule that exceeds space-time where it is sent to the past to erase someone or something), Resistance to Poison Manipulation, Spatial Manipulation and Corrosion Inducement (Unaffected by the miasma in the M District, which is so corrosive it can cause anyone to die within five minutes and even distort space itself), Higher-Dimensional Manipulation (Is unaffected by Mana-based attacks), Law Manipulation (Should be similar to the Angels and Anti-Angels, who become "not of this world" when connecting to the Sefirot or Abyss which renders the laws of the physical world useless to them)

Attack Potency: At least Multi-Continent level (Can contend with a fully possessed Belial. Can create a mini-star that generates power comparable to solar flares. Should be comparable to a fully possessed Beelzebub), likely at least Large Planet level (Masada stated that the characters in Paradise Lost are stronger than the Three Commanders from Dies Irae. This is specified to those of the Angels and Anti-Angels, of which Masada ranked them in the same place as Methuselah, the Yatsukahagi from Kajiri Kamui Kagura, and the Seven Demon Kings from Avesta in terms of power level). Hyperverse level with Sin (Ast is a sin bearer and has copied many abilities with it. She is able to use Netsiv Melakh which is the trump card to use against Belial) Many of her abilities ignore conventional durability

Speed: Massively Hypersonic+ (Can react to and deflect bullets. Left numerous sonic booms during her battle against Belial and Beelzebub, she is also stated to move at lightning speed) with Speed of Light Combat Speed and Reactions (Should be comparable to Belial)

Durability: At least Multi-Continent level, likely at least Large Planet level (Fought against Lyle who had Nacht in Control together with Judas who had Beelzebub in Control) Hyperversal level via Sin (Shares an existence similar to Belial and Beelzebub, whose connection to the Abyss cause them to be "not of this world" which makes them invulnerable to any attacks in the physical world and even those of similar higher dimensional nature like Mana, requiring Sin or any higher-dimensional source equal to the Abyss in order to harm them)

Intelligence: Astaroth is a calm and calculated being, able to perfectly assess a given situation based on observation alone without even using her mind-controlling abilities by accurately predicting the probability of an event occurring such as when and where an attack on Satanael from assassins will happen as well as knowing when and where a group of people are by gauging their adrenaline rate and heartbeat and even know how many of them including what objects or weapons they might have on them. In combat, Astaroth's ability to utilize the various powers of the deceased Angels of Satanael's Army thanks to her ability to process large amounts of their information and power to revive their abilities grants her many options and ways in how to deal with any kind of enemy, from using more "weaker" abilities to deal with situations that don't require her more powerful attacks like Baraqiel and Samyaza to using the more powerful attacks of the Seraphs against enemies her usual attacks and abilities may not be sufficient enough.

Weaknesses: Despite her connection to Quintessence, she can still strain herself when continuously using her abilities (however, it should be noted that it is unknown to what degree can this hamper her).

A "fifth DNA base" implanted within Angels and Anti-Angels by Nerose Satanael. It is a higher element which controls the four elements of nature that becomes ethereal energy when broken down.

Through the use of this "Fifth Element", Angels and Anti-Angels can draw upon energy from higher dimensions through the use of a planet's ley lines such as the earth. Said higher dimensions come from the Tree of Sephirot, going from the physical world that is Malkuth to all the way to the highest point Keter, where the Godhood resides along with it being the manifestation of the Throne. This is referred to as Positive Quintessence, and it is with this that the Angels use as they are sinless beings which allows them to use the Sephirot to draw its energy for their abilities. For those of Sin like the Anti-Angels, their Quintessence is Negative and they instead draw their source of higher dimensional energy from the Abyss, which is referred to as God's dumpster. Whereas the Tree of Sephirot has dimensions that ascend from the physical world, the Abyss in contrast descends from the physical world to all the way to the lowest point that is Judecca, which is also a manifestation the Throne like the Sephirot's Keter.

In other words, one who possesses this DNA base allows them to draw upon higher dimensional energy into the physical world, which powers their attacks in addition to giving them other benefits such as a lifespan equal to the planet and making them unaffected by anything in the physical world, making anyone who fights them needing to use Quintessence or a higher dimensional source of similar nature in order to truly harm them.

One of the names Astaroth possesses per her classification as an Anti-Angel according to the Illuminati.

She has the ability to take control of others as well as replicating their information and memories. This works by having Astaroth connect her mind with her target, essentially becoming the "same person". This ability primarily works by directly touching her target, though she is also able to take control of them just by merely hearing and seeing them once. This ability even allows her to take over the minds of Angels, with Ast taking hold of tens of thousands of them at one point. Controlling the mind of an Angel requires one to process large amounts of information from them, which is averted for Ast's case due to Satanael implanting her being with specs comparable to a supercomputer. With that, Satanael states that Ast could use this very same power to take over an entire countries population.

Demonic Mirror also goes so far as to grant Astaroth the powers of those she has synchronized her mind with, shown in the several of the tens of thousands of Angels she had controlled in the past including the abilities of even the Seraphs themselves.

The initial fighting mode of Astaroth. These attacks are based on the names of the Angels who fell from grace for teaching mankind forbidden knowledge. In this state, it is normally used against weaker enemies or when the situation isn't needed to fight at full power. The attacks shown here are as followed:

Another fighting mode of Astaroth, used when her normal attacks in Enoch are not enough in a fight. In this mode, Astaroth utilizes even more powers and names of the Angels she has copied from, this being those of the Seraphs, the top-class weapons of Satanael's Angel Army as well as the strongest. The attacks shown here are as followed:

The personal Formula of Astaroth, the embodiment of which signifies her name and that of "Criminaltorres".

Astaroth is the name of one who sees the past, present, and future. Initially, Astaroth was only able to see a little of the past and future but after Sodom was destroyed as a result of Lot's actions, this boosted her ability tremendously to the point of perceiving Keter, the Throne of Muzan on the Sefirot, as its starting point and the creation of Satanael's true Zoar as the end point.

This very system that is named Astaroth disassembles and rearranges itself into elementary particles that exceed space-time but instead of sending it to the future, it goes towards the past. For Satanael, who was shown a prophecy of his plan to ascend to Keter by Astaroth, this power performed by the latter would erase the man known as "Nerose Satanael", he who is the origin of Angels and brought Sin into the physical world through the act of piercing through the Sefirot to the Abyss, achieved by erasing the God on the Throne and in turn having the true "Zoar" Satanael desires to reach by creating it in a parallel timeline. It is for this reason that Astaroth herself, despite never using Sin, bears the name and existence of an Anti-Angel as the one who slays her father and creator. Additionally, this system also allows Astaroth to revive the Angels of the past who have perished although this is limited to only reviving their abilities and not the Angels themselves.

However, this very power from the one created by Satanael has a flaw: The system of Astaroth which shows Satanael ascending to the Throne and overthrowing God to create the desired world of Zoar is something that is not predetermined and fated to reach upon his death, but rather it is something that the Anti-Angel herself, who bears the name "Criminaltores" that determines whether this should happen or not. In other words, it is up to Astaroth in whether the prophecy goes through or have it denied.