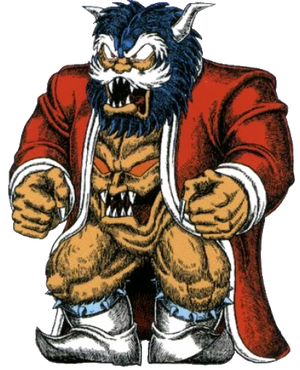 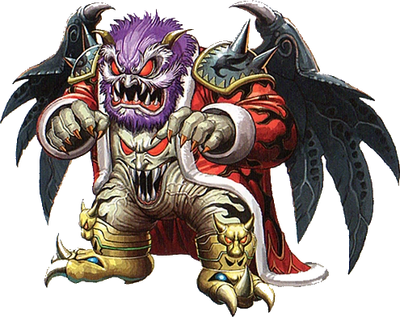 He is the evil, merciless ruler of Demon Realm in his master Lucifer's stead and is apparently based on Astaroth, a Crowned Prince of Hell in demonology.

Powers and Abilities: Superhuman Physical Characteristics, Large Size (Type 0), Immortality (Types 1 & 4), Resurrection (Is able to survive what seems like certain death for humans by being able to revive himself), Magic, Illusion Creation, Duplication (As seen here), Invulnerability, Extremely resistant to pain, Fire Manipulation (Can shoot fireballs from both his top/abdomen mouths), Breath Attack (Can breath long fire streams from his mouths), Energy Projection (Can fire powerful laser beams from his top mouth), Earth Manipulation (Can shoot rocks from his abdomen mouth in Ultimate Ghosts 'n Goblins), Transformation (Can turn into Dark Astaroth as seen in Ultimate Ghosts 'n Goblins), Darkness Manipulation, Electricity Manipulation (Can fire electrical beams from his mouth), Flight (Via his wings as Dark Astaroth)

Attack Potency: Multi-Continent level (As a demon king, is much stronger than Red Arremers such as Firebrand. Fought against Arthur with his strongest armors), likely higher as Dark Astaroth (Is stronger than his base form)

Speed: Sub-Relativistic (Should be as fast as Arthur, Firebrand and Red Arremers), likely higher as Dark Astaroth

Durability: Multi-Continent level (Survived hits from strong-armored Arthur), likely higher as Dark Astaroth (Is more durable than his base form)

Range: Hundreds of meters with fireballs, laser beams and rocks, higher with illusions

Intelligence: High (Is an expert deceiver, able to make illusions and mirages ranging from an identical clone of himself and entire areas working as traps despite that being devised by Satan)

Weaknesses: Can only be damaged/vanquished with holy weapons (such as Shield/Cross)