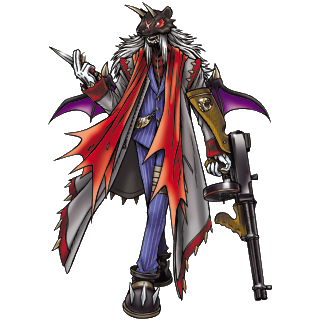 Astamon is an Ultimate level, Demon man type Digimon. He is a prince of the Dark Area, ruling it along side GranDracmon. It is a very charismatic Digimon who shows the utmost kindness to his friends, and the most appalling cruelty to his enemies. The bullets from his machine gun "Oro Salmón" have been stated to have free will, and will hunt their enemies "to the ends of hell".

Gender: Genderless, but regarded as Male

Age: Unknown, though younger than GranDracmon

Attack Potency: At least Galaxy level (Is a prince of the Dark Area. Stated to surpass the power of Mega Digimon)

Speed: Relativistic+ with FTL Combat and Reaction Speed (Comparable to other Mega Digimon)

Range: Multiversal+ (His bullets are stated to follow the enemies "till the ends of hell", likely referring to the Dark Area)

Intelligence: Astamon is an extremely charismatic figure, who was able to gain a massive following within the Dark Area [which is no easy task, considering that even weaker members of the area are perfectly capable of destroying large islands]. It should go without question that he is an extremely skillful warrior, being one of the few Digimon considered worthy enough to gain a custom crafted weapon from Vulcanusmon.

Retrieved from "https://vsbattles.fandom.com/wiki/Astamon?oldid=5194702"
Community content is available under CC-BY-SA unless otherwise noted.