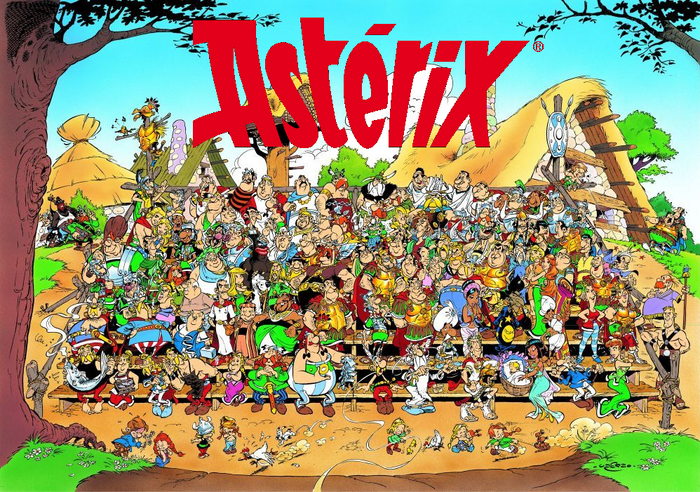 For detailed information about this series, visit the Wiki Astérix.

Astérix is a a series of fictional comic books created by René Goscinny and Albert Uderzo. Although they are originally written and published in French, their extreme popularity has resulted in the books being released in a wide range of languages. The series focuses around the adventures of the Gaulish warrior Astérix and his friend Obélix.

The series is set in 50 BC, in a fictional village in northwest Armorica (a region of ancient Gaul mostly identical to modern Brittany). The village is surrounded by the ocean on the northern and western sides, and is ringed by a high wooden gate. The other sides of the village are on the edge of a thick forest, within which there are contains four Roman garrisons which are intended to keep an eye on the village.

This village is celebrated as the only part of Gaul not yet conquered by Julius Caesar and his Roman legions. This is achieved by the inhabitants gaining superhuman strength by drinking the magic potion brewed by the village druid Getafix, which allows them to confront and defeat any advancing Romans. The villagers lead a content, proud lifestyle, often getting into fights among each other for fun or against patrolling legionaries from the Roman camps.

Astérix's adventures range between a wide variety of locales, including the village itself, Gaul, Rome and other far-flung countries. Frequently, Astérix and friends must deal with the Romans' attempts to conquer the village, defend their pride as indomitable Gaulish warriors, or offer assistance to those in need.

Astérix is formidably a powerful verse on it's own despite not having much impressive hax. The Gaulish warriors and potion-drinkers are Town level in power and durability for taking hits from each other and throwing a spear around the Earth at extremely fast speeds. This feat also applies to their speed which is Sub-Relativistic. They can also lift full-grown pine trees extremely casually, able to reverse hypnosis and being immune to paralysis.

Unlike Gaulish warriors and Roman legionaries, Spring is unexpectedly much more powerful at Large Mountain level to possibly Continent level for bringing spring all over the world to replace winter each year. On speed, he is likely not far from his mother, who can move interstellar distances.

Asterix The Greatest Comic Books of All Time Ep.6

The Astérix Cartoons - Review Overview
Add a photo to this gallery