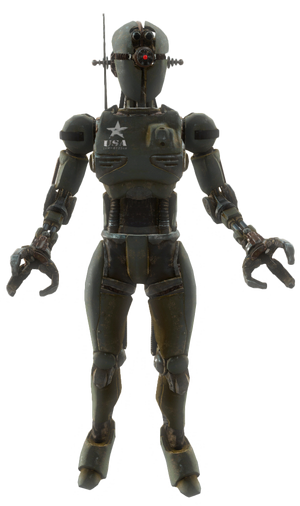 Assaultrons are a type of robot encountered in Fallout 4. The assaultron robot was constructed by RobCo and sold to the US Military as a front-line wartime combatant. It is fast and deadly at close range, and employs a devastating laser at a distance.

Tier: 9-B physically and with hand attachments, 9-A with head laser, 8-C with their self-destruct explosion

Gender: None, although some identify with genders due to their programming (i.e. KL-E-0, who identifies as a woman)

Intelligence: Average to Above Average (Reliant on their programming)

Weaknesses: They're vulnerable to EMPs; if their heads are damaged they can't use their head laser, but this is mitigated by their extra armor covering their head; their legs are more vulnerable to damage, but they will still continue to attack via crawling until they use their self-destruct sequence