Assassin of Black (Jack the Ripper) 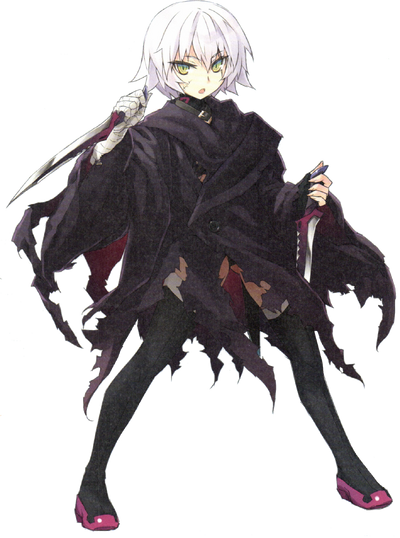 Assassin of Black is the Assassin-class Servant of the Black Faction in the Great Holy Grail War, originally summoned by Hyouma Sagara. However, she rejects him as a Master and instead chooses Reika Rikudou as her surrogate mother.

Her True Name is Jack the Ripper, the Legendary Serial Killer of 19th century England. She is born from one interpretation of what occurred, and is not a single being but a collection of wraiths formed from dead and abandoned children.

Gender: Appears as a Female, but refers to herself as "we" due to being the conglomeration of the grudges of 80,000 children of both genders

Powers and Abilities: Superhuman Physical Characteristics, Skilled knife wielder, Enhanced Senses, Invisibility and Stealth Mastery with Presence Concealment (Presence Concealment users with B-rank or higher are capable of rendering themselves invisible by erasing their presence, making themselves difficult to detect against Magi and even Servants unless they attack), Curse Manipulation (Can materialize her knives within an opponent, given that the conditions are met, as a curse), Memory Manipulation (Her Information Erasure skill erases any records of her identity and abilities from surveillance technology and the memories of opponents), Acid Manipulation (The Mist allows her to reproduce the sulfuric acid laden smog of Victorian Era England and spread it across a given area), Smoke Manipulation, Pocket Reality Manipulation (Can use an ability similar to a reality marble, constructed from their memories. It usually takes the form of either an expansive void-like grey Mist, or the City of London at the rime from witch Jack came, often a combination between the two. It is also not limited to recalling their own memories, as it can manifest the memories of their enemies as well, however these do not seem to have the same kind of form), Servant Physiology, Resistance to Curses (As an "impure" Heroic Spirit, she's resistant to curses such as All the World's Evil)

Attack Potency: Island level (Deflected attacks from Ruler and Mordred. In Fate/Grand Order, she fought Shielder and Mordred but was eventually defeated), ignores conventional durability with Maria the Ripper when its conditions are met (Materializes her knives within her opponent's body, ripping them apart from the inside and forcing out their organs)

Speed: Massively Hypersonic (Has A-rank Agility, can keep up with Mordred)

Range: Standard melee range, further with thrown knives, up to Tens of Meters with the Mist. Multiversal+ with Information Erasure (The erasure transcends eras, even reaching Chaldeas's systems)

Intelligence: Despite her childishness and young age, Jack is cunning and intelligent. Although she is unstable, she thinks rationally and is a skilled fighter, utilizing The Mist to force even the likes of Mordred on the defensive and attempting to vivisect Ruler while she attempts to rescue a child. Jack's knowledge on surgical techniques and medical procedures allow her to treat her wounds and those of her Master, and she can even transfer the Command Spells from her original Master to Reika's hand.

Weaknesses: Jack cannot fight while in spirit form. To fully utilize Maria the Ripper's effects as a curse, her target must be a woman, it must be misty, and it must be night. The Mist can be escaped by those with strong Instinct or magic.