VS Battles Wiki
Register
Don't have an account?
Sign In
Advertisement
in: Characters, Fate, Servants (Nasuverse),
and 25 more 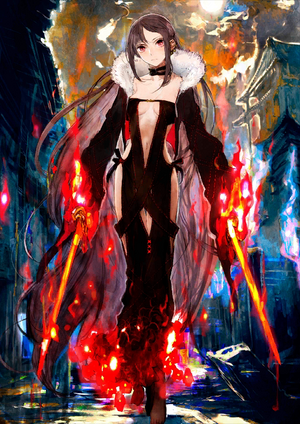 Her True Name is Yu Miaoyi, the concubine of Xiang Yu during the late Qin dynasty who was shrouded in mystery and mentioned in fragments of the Records of the Grand Historian. She was renowned for her beauty and for accompanying Xiang Yu on all of his battles. While she was believed to have been a human she was in reality a Zhenren, a vampiric creature very similar to a True Ancestor

While she supposedly committed suicide during the Battle of Gaixia when Xiang Yu's castle was besieged by Liu Bang, in truth she survived and would continue to wander the world for millennia. In 500 A.D., she had met Gao Changgong, promising to someday meet him again due to how he treated her. By 2015 she had been brought into the Chaldea Security Organization under the alias Hinako Akuta, by Marisbillly Animusphere as an experimental subject for rayshifting in case it was harmful for humans. She eventually joined the A-team and became one of the 48 Master candidates to investigate Singularity F. However, due to the sabotage by Lev Lainur Flauros, she was critically injured and placed into cryosleep to ensure her own survival. On December 27th, 2017, she was awakened by the Alien God and joined the other six Crypters in their attempt to usurp the Pan-Human History and replace it with a Lostbelt. She was put in charge of the third Lostbelt, S.I.N, and was given the task of growing the Fantasy Tree there.

Powers and Abilities: Superhuman Physical Characteristics, Immortality (Types 1, 3 and 7), Summoning (Summoned Gao Changgong as her Servant), Blood Manipulation, Absorption (Can absorb life force and magical energy by drinking blood. Can indefinitely siphon mana from the environment), Limited Telekinesis (Can control the movements of her blades), Weather Manipulation and Curse Manipulation with Eternal Lament (Causes abnormal weather by means of a curse, and deal damage through curses), Invisibility and Stealth Mastery (Presence Concealment users with B-Rank or higher are capable of rendering themselves invisible by erasing their presence, making themselves difficult to detect against Magi and even Servants unless they attack), Soul Manipulation (Can drain the spiritual cores of her targets), Regeneration (Works by reversing time. High-Mid to Low-High; can reconstructs her body from being blown to small pieces and puddles of blood), Can exist as a disembodied soul, Servant Physiology

Attack Potency: Island level (Should be comparable to Servants like EMIYA), Island level+ with Eternal Lament (As a C+ Rank Anti-Army Noble Phantasm, it is superior to C-Rank Noble Phantasms like Triple-Linked Crane Wings) | Large Island level (Qin Shi Huang stated that she was the only one that was comparable to him in the Lostbelt, making her superior to Xiang Yu who was stated to have a mana pattern that rivaled dragon-class magical beasts. Was called a Divine Spirit class existence by Da Vinci making her at least somewhat comparable to the Lion King. Is able to easily wipe out the combined force of Shielder, Red Hare, Chen Gong, Jing Ke, Koyanskaya, Sherlock Holmes and Rider Da Vinci), higher with Eternal Lament

Range: Tens of meter with her swords, far higher with Eternal Lament

Intelligence: Above average. As a Zhenren and thus an immortal, Yu has accumulated a lot of knowledge over the course of at least 2,200 years. Due to being a Xian herself, Yu is knowledgeable on the Xian Arts and the Fusang Tree. She knew about the poison Koyanskaya used in her assassination attempt on Ritsuka and that the antidote could only be made from components of the Fusang Tree, which allowed her to anticipate the arrival of Chaldea in her Lostbelt. She was able to utilize the Fusang Tree's characteristics to deceive Qin Shi Huang by growing the Fantasy Tree in it. She is also quite observant and cautious when she's not enraged as she managed to see through the countless wise men that tried to learn the secret behind her immortality. While Yu is not a warrior she is able to effectively use her swords, blood and her elemental nature to overwhelm her opponents with continuous powerful attacks, even against skilled and powerful Servants.

Weaknesses: Cannot fight in Spirit Form. Her tactical prowess as a master is quite bad. Yu harbours a deep hatred and rage against humans. She is reluctant to consume blood for nourishment and is unlikely to use her bloodsucker ability in combat. Yu will die if she uses her Sirius Light.

Eternal Lament: The Cursed-Blooded Immortal's Song of Grief: A drastic move that causes Yu's magical energy to exceed its limits and go on a rampage by tearing up her own body. Through means of a curse, it causes the weather to change, creating a storm of her own blood to harm hundreds of targets at once. One could say that this is a suicide attack only possible due to her nature as an Elemental, wherein she shares her spiritual core with the environment.

Presence Concealment: The signature class skill of the Assassin class, erasing the Servant’s presence and making it nearly impossible to detect them until they move to attack. Yu's B-Rank makes it so humans and Servants find it extremely difficult to discern her presence, but the effects will be rendered nonexistent as soon as she attacks.

Incarnated Spirit: Due to her nature as an Elemental, Yu shares her magical energy with the World, as a result she lacks the concept of magical energy storage and draws upon the inexhaustible magical energy of the world instead. However, since she is bound to a "human" form, there is a limit to her output despite possessing an infinite supply. The amount of magical energy that she can employ is confined to the domains of human-shaped Heroic Spirits.

Winged Immortal of the Xian Realm: A skill she possesses as a xian, an immortal spoken about in Taoist ideology. Because interference from the natural world is required for the maintenance of her body, one could also say that she is bound to a human form as a result.

Blood-Sucking: The ability to drink another's blood to replenish one's health and magical energy. Yu is able to absorb energy from any life-form, regardless of it being a plant or animal, and use it for herself. Due to her power as a Zhenren, she is able to completely drain the spiritual core of a Heroic Spirit within mere seconds.

Other Skills and Abilities

Sirius Light: The special authority bestowed to the Crypters by the Alien God. It's a Great Command Spell that is considered their strongest power and trump card. With its power, Surtr stated that he would have been able to accomplish what the King of Mages attempted through the incineration of the human order. The cost of using the Command Spell, however, is the user’s life.

Earth Spirit Absorption: A skill that seemingly allows Yu to instantly draw magical energy from the world in order to endlessly unleash her most powerful attacks.