VS Battles Wiki
Register
Don't have an account?
Sign In
Advertisement
in: Tier 6, Tier 6-C, Characters,
and 27 more 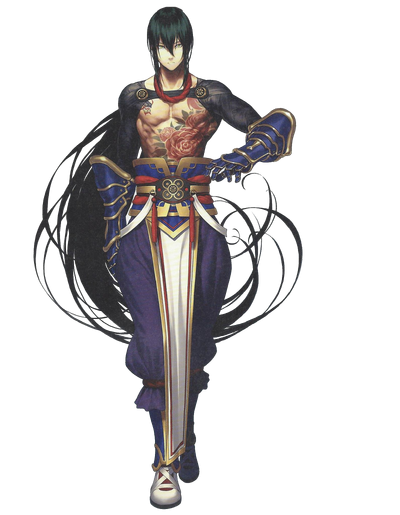 Assassin of Shinjuku is an Assassin-class Servant able to be summoned by Ritsuka Fujimaru in the Grand Orders of Fate/Grand Order. He makes his debut in the Shinjuku Sub-Singularity.

Assassin's True Name is Yan Qing, an outlaw who joined the Grand Assembly of the 108 Stars of Destiny in "Water Margin", one of the Four Great Classic Novels of Chinese literature. Despite being an ostensibly fictional character, he was renowned as the founder of the Yan Qing Quan school of martial arts.

Speed: Massively Hypersonic (Boasts A+-Rank Agility, making him one of the fastest Servants)

Intelligence: Even when compared to others in his class, Yan Qing is an exceptionally talented assassin. In addition to his standard Presence Concealment, he is easily able to conceal his identity and intent, taking the form and memories of individuals as a means of subterfuge or gathering and spreading information through his Espionage skill. Additionally, he is a master in hand-to-hand combat, having skill on the level of Li Shuwen and is considered a "master among masters" when compared to other martial artists, in addition to inventing several martial arts styles.

Weaknesses: Cannot fight in Spirit Form. Repeated use of Doppelgänger will cause Yan Qing to lose his sense of self due to the memories he is given.

Ambushed from Ten Sides - As If There Was No Shadow: A Noble Phantasm representing Yan Qing's own fighting style, producing several duplicates through means of his unique footwork while attacking his enemies from various angles. While it does not reach the realm of magic, the strikes are imperceptible to an outside observer, said to not even leave shadows on the ground.

Presence Concealment: The signature class skill of the Assassin class, erasing the Servant’s presence and making it nearly impossible to detect them until they move to attack. At C-Rank, Yan Qing is difficult for a human or Servant to detect, but he will be immediately rendered visible when he begins to attack.

Ruffian: A skill combining Riding and Independent Action. At A-Rank, it allows Yan Qing to ride any vehicle or animal with adept skill, with the exception of Phantasmal and Divine Beasts, and remain manifested for one week without a mana supply from his Master.

Chinese Boxing: A martial arts style utilized by Yan Qing. A Chinese system of skills refined and pursued in the goal of becoming one with the universe. It is a skill said to be difficult in terms of learning at the highest level and, unlike other skills, one with a rank of A is at a level where they can be said to have "finally learned it". Although his rank in this skill is EX, it is functionally similar to A+++. Nonetheless, he is a master among masters in the art, said to be the origin of various existing martial arts.

Doppelgänger: A skill Yan Qing gained as a result of the Phantom he fused with. It allows him to transform into other individuals, be they simple civilians or Servants like Hassan of the Cursed Arm, and gain their memories and even skills in the process. Originally this skill would have been an ability on the class of a Noble Phantasm, with the potential of having perfect imitation of any being Yan Qing transforms into. However, using this ability repeatedly will overload his mind with the memories and make him lose his sense of self, and he cannot replicate a Servant's Noble Phantasm.

Espionage: A skill that masks Yan Qing's presence. Unlike Presence Concealment, this skill makes it difficult for Yan Qing's presence to be registered as hostile. At A-Rank, so long as Yan Qing's name is not known, he is able to gather and spread information with no trouble at all.

Skillful Star: A skill denoting Yan Qing's nature as one of the 108 Stars of Destiny, known to bring about calamity. As a reincarnation of a demonic overlord, Yan Qing was born bearing the burden of calamity and karma, and exceedingly excels in use of his skill.