VS Battles Wiki
Register
Don't have an account?
Sign In
Advertisement
in: Characters, Nasuverse, Fate,
and 27 more 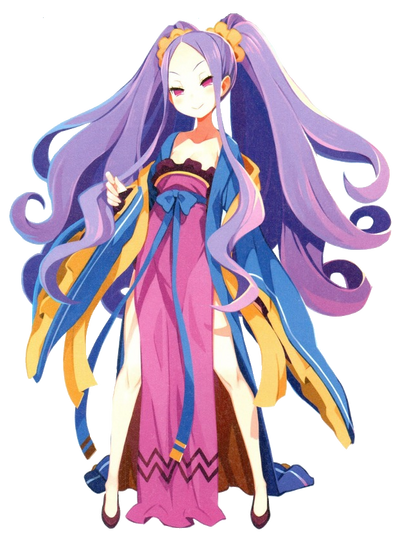 Assassin of Nightless City is an Assassin-class Servant able to be summoned by Ritsuka Fujimaru in the Grand Orders of Fate/Grand Order, debuting in the Agartha Sub-Singularity.

Assassin's True Name is Wu Zetian, the sole ruling Empress in Chinese history who lived during the 7th-8th century. Initially the consort of Emperor Taizong of Tang and his son, Gaozong, she attained the position of empress after manipulating events to have Empress Wang and Consort Xiao executed.

During her rule, she repeatedly assassinated various relatives and political opponents, and started the Zhou Dynasty. Her fifteen year reign was one of fear and torture, before her ultimate death due to serious illness. Even though she lived an incredibly long life, she is summoned at a very young age due to believing it to be the height of her life.

Powers and Abilities: Superhuman Physical Characteristics, can gain new skills via Imperial Privilege, allowing her to modify her body, amplify her stats, ride virtually any mount or vehicle with supernatural skill, and so on, Summoning (Capable of summoning the Ku Li, her personal inquisitors that inherit her skill in torturing), Damage Boost (Her attacks become more powerful if she is using torture tools), Mind Manipulation with Empress's Charisma, Stealth Mastery with Presence Concealment (Can render herself virtually undetectable until she moves to attack, though it's essentially ineffective against other Servants), Conceptual Manipulation and Law Manipulation with Manual of Accusation (Her Noble Phantasm blurs the concepts of life and death, and imposes laws that prevent the target from resisting her offenses, and sets up the situation with her as The Torturer and her target as the one who will be tortured), Poison Manipulation, Supernatural Luck, Minor Fate Manipulation (Servants with B-rank Luck or higher can change their own fates to evade inevitable outcomes such as having their hearts destroyed by Gáe Bolg) and Servant Physiology

Attack Potency: Island level (Should be comparable to EMIYA. Fought against Astolfo during the events of Agartha), higher with Imperial Privilege (With Imperial Privilege one can get new skills as long they aren’t exclusive to another Heroic Spirit), Island level+ with Gàomì Luózhī Jīng (Heavily crippled Demon God Phenex, and as a B-Rank Noble Phantasm it should be comparable to Phoebus Catastrophe)

Stamina: High (Servants can fight for an entire day without tiring and continue fighting for as long as they have sufficient mana. Even after being heavily wounded by Astolfo in her encounter with Chaldea, she was able to lay low and stay alive long enough to help take down Phenex with her Noble Phantasm before finally succumbing to her wounds)

Intelligence: While haughty and arrogant, Wu Zetian is by no means foolish. In her life, she was manipulative enough to orchestrate her ascension to the throne, systematically maintaining her rule for over a decade by assassinating her political opponents, which carried over to her summoning with her rule of the Nightless City and carrying out the destruction of Ys. In combat, she possesses notable skill in swordsmanship thanks to her Imperial Privilege, allowing her to face Astolfo and Chevalier d'Eon on equal footing. She is also incredibly skilled in the art of torture, allowing her to easily extract information from victims after only one or two sessions, with her skill being on par with Elizabeth Báthory and Carmilla.

Weaknesses: Cannot fight in Spirit Form. Wu Zetian is incredibly terrified of cats after one of her retainers claimed to have cursed her to be reborn as a mouse.

Gàomì Luózhī Jīng (Manual of Accusation): A Noble Phantasm named after a manual possessed by inquisitors during her reign, essentially a how-to book on torture and interrogation serving to increase the number of criminals. Its activation is akin to materializing a law that "she freely allows for criminals to be produced", turning her into the "one who tortures" while her opponent becomes, without resistance, the "target to be tortured". The vat itself is another plane of existence, where the very concepts of Life and Death are blurred. Her targets are kept in a constant state of torture, while they are in both life and death at the same time. This Noble Phantasm is very useful for incapacitating those who are immortal or those who make use of Resurrection, such as the Demon God Pillar Phenex, as their usual abilities will be totally useless while they are held in this plane of existence. Aside from a multitude of other torture devices, she currently makes use of broken wine jars and poison that she commonly used against her political enemies.

Presence Concealment: The signature class skill of the Assassin class, erasing the Servant’s presence and making it nearly impossible to detect them until they move to attack. As she was not a true assassin in life, she only possesses a meager D-Rank in this skill, rendering it difficult for ordinary humans to detect her but making it useless when faced with another Servant, to the point where it's comparatively described as being akin to her hiding behind bamboo blinds.

Empress's Charisma: A variation of the Charisma skill, signifying her history as the empress who established the Zhou Dynasty, allowing her to easily manage a state. While she ruled through fear, she was also intelligent enough to appoint the appropriately talented people for higher positions of power. She has an A rank in this skill.

Imperial Privilege: An ability that allows Wu Zetian to gain skills that would normally be impossible for her to possess for a short amount of time. Unlike most users of the skill, Wu Zetian did not inherit this position, but attained it through incredible effort and make the emperor of the Tang Dynasty know her. It made her understand the pursuit of knowledge, physical training, etiquette refinement, and knowledge of how to advance the performing arts. The skills gained include Riding, swordsmanship, fine arts and military tactics.

Torture Techniques: The possession of exceptional skill in torture, granting bonus modifiers to damage when using torture tools, and adding more and more damage due to the bleeding it causes. In addition to possessing these techniques herself, the Ku Li under her command are also endowed with this ability. Wu Zetian is primarily capable of using these techniques to extract information out of her victims, for if they have anything to hide, they will admit it upon the second torture session.