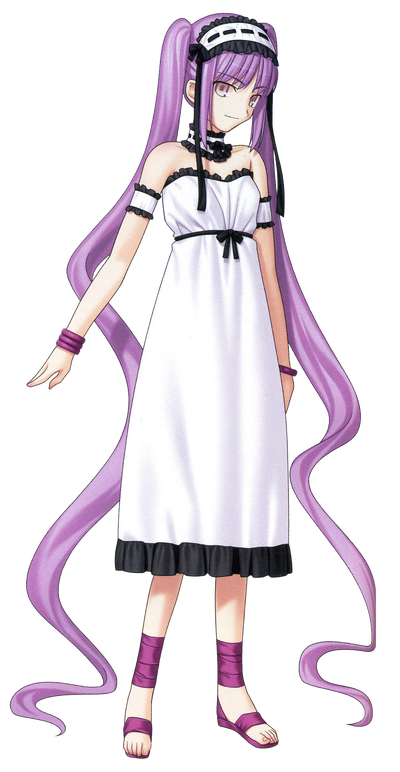 Assassin is an Assassin-class Servant able to be summoned by Ritsuka Fujimaru in the Grand Orders, first appearing as one of the Servants materialized in the Septem singularity.

Her true name is Stheno, the eldest of the three Gorgon sisters, a perfect goddess born from humanity's wishes for ideal, eternal idols. She was banished to the Shapeless Isle by Athena alongside Euryale and Medusa, where they remained for some time, protected by Medusa until she ultimately transformed into Gorgon, the Queen of Magical Beasts, and consumed her elder sisters.

Powers and Abilities: Superhuman Physical Characteristics, Magic, Mind Manipulation (Can charm men and women with her voice), Resistance to Mind Manipulation (Her divine nature grants her absoluteness of mind, repelling mental interference), Immortality (Type 1) | All previous abilities, plus Invisibility and Stealth Mastery with Presence Concealment (Presence Concealment users with B-rank or higher are capable of rendering themselves invisible by erasing their presence, making themselves difficult to detect against Magi and even Servants unless they attack), Supernatural Luck and Minor Fate Manipulation (Servants with B-rank Luck or higher can change their own fates to evade inevitable outcomes such as having their hearts destroyed by Gáe Bolg. Stheno possesses EX rank luck, Taiga Fujimura who is said to have the equivalent of EX Luck was able to cause a butterfly effect during the Fourth Grail War which saved the World 3 times including causing a massive Asteroid to Change its course), Limited Power Nullification, Servant Physiology, Resistance to BFR

Attack Potency: Below Average Human level (On her own, Stheno is helpless and vulnerable to attack from even ordinary humans, being one of the weakest beings in the world, needing Medusa's help to survive) | Island level (As a Servant, her capabilities are actually boosted by her class, bringing her to the lowest rank of Strength, allowing her to physically contend with other Servants. Was able to spar with Medusa when she wasn't holding back with help from her sister Euryale)

Speed: Unknown | Massively Hypersonic (Can keep up with other Servants)

Stamina: Average | High (Servants can fight for an entire day without tiring and continue fighting for as long as they have sufficient mana)

Intelligence: Due to being secluded on an island for most of her life and being protected by Medusa, Stheno lacks proper combat experience. She is more sturdy as a Servant and can presumably hold her own long enough for help to arrive despite being called one of the weakest beings in the world.

Weaknesses: Stheno is virtually helpless on her own. | Stheno cannot fight in spirit form and lacks any combat experience. Smile of the Stheno's true worth is only visible against men.

Smile of the Stheno: Goddess's Smile: Stheno's alluring qualities and ability to cause any warrior to fall in love with her in a single blow, sublimated as a Noble Phantasm when summoned as a Servant. Her every whisper and gaze can sway the hearts of men, dripping with poison as she moves in for the kill by performing a stunningly adorable pose, allowing her to (potentially) instantly kill men...somehow.

Magic Resistance: An innate ability that grants protection against magical effects. Unlike the Resistance effect, which merely rejects Magical Energy, this ability cancels the spells altogether. Stheno's divine nature grants her an exceptional rank of A, completely negating all but the strongest and oldest spells of the Age of Gods and rendering her effectively completely immune to any magecraft in the modern era.

Presence Concealment: The ability to hide one's presence as a Servant. Stheno's A+ rank proficiency in this skill renders her virtually impossible to detect when spying and even in the presence of another Servant unless she decides to attack, upon which this skill's effect sharply drops.

Alluring Nightingale: A skill possessed by those with naturally beautiful voices, which they can use to charm others as a declaration of their position of authority. Against women, this makes Stheno's words alluring, allowing her to easily charm others, but it can be negated by Magic Resistance or resisted by those with a strong enough will.

Bloodsucking: One of the powers of a vampire, which allows Stheno to replenish her health, magical energy, and stamina by drinking the blood of others. While it is effective regardless of who it's used on, it grants the most energy when Stheno drinks the blood of her beloved sister.

Goddess' Divine Core: The divinity of an existence designated as a perfect goddess at the moment they were born, granting Stheno the effects of the Divinity skill, allowing her to reduce "Anti-Purge defense" in proportion to its rank, allowing her to break through defensive abilities such as Achilles' Andreas Amantos. It also grants her absoluteness of her body and mind, repelling mental interference, and prevents her body from growing any older or changing in shape due to caloric intake.

Goddess' Whim: A goddess' nature manifested as a skill, granting a variety of different skills to Stheno when utilized, such as allowing her to increase the power of herself and her allies, particularly the divine. 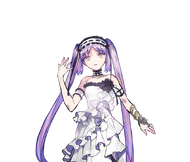 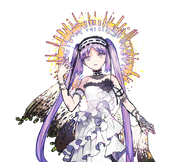 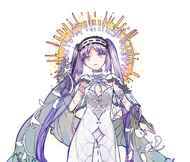