VS Battles Wiki
Register
Don't have an account?
Sign In
Advertisement
in: Characters, Nasuverse, Fate,
and 25 more 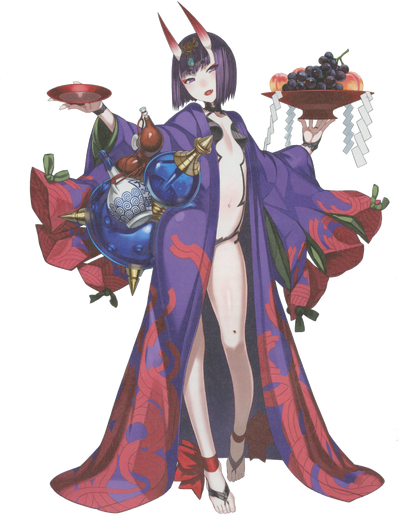 Assassin is an Assassin-class Servant that appears during the Rashomon event in Fate/Grand Order, later able to be summoned by Ritsuka Fujimaru in the Grand Orders.

Assassin's True Name is Shuten-douji, an oni birthed from either the infamous Yamata-no-Orochi or the famed dragon god Kuzuryu. One of Japan's Three Great Monsters and the ruler of Mount Ooe, she devoured many young men and women as snacks during her drinking bouts, taking special interest in Kintoki, a member of Minamoto no Raikou's Four Heavenly Kings. She and the rest of her brethren were later poisoned and slain by Raikou as retribution for their murderous rampages, reaching the Throne of Heroes as an anti-hero for her deeds.

Powers and Abilities: Superhuman Physical Characteristics, Magic and Statistics Amplification (Can utilize Mana Burst to enhance her strength, speed, and durability), Stealth Mastery, Mind Manipulation (Can make others intoxicated and drive them into insanity with her Alcoholic Fruit skill) and Social Influencing (Is extremely convincing to others due to her Oni Demon Kind skill, which includes the Charisma skill), Can continue fighting on even with lethal wounds (Attacked Raikou despite having her head severed), Summoning (Can also summon Orochi due to being his descendant), Poison Manipulation, Status Effect Inducement, and Power Nullification with Providential Oni Poison (Can inflict any kind of status ailment upon her foes), Bone Manipulation (Can instantly extract the bones of others without damaging the exterior of their bodies), Servant Physiology | All previous abilities, in addition to superior Regeneration (At least High-Mid, likely Low-High. Heroic spirit swordmasters are able to come back if just one finger remains, and the only way they can be stopped for good is to make sure not a single speck of them is left behind.), Reality Warping, Soul Manipulation (They can all summon a dueling arena in a manner compared to Reality Marbles, where the loser will have their soul consumed.), Invisibility (They are all capable of concealing their presence in a manner similar to Presence Concealment.), Aura and Fear Manipulation (They all possess a evil ki that induces fear on anyone around them)

Attack Potency: Island level (Has a strength parameter that makes her comparable to Heracles. Posed enough of a threat to Raikou and Kintoki that they resorted to poison rather than face her outright. Fought Kintoki numerous times in life, with the latter having stated that they would always put themselves in a draw even while fighting at full power in life). Can ignore conventional durability with Providential Oni Poison and Bone Collector | Island level (Much stronger than their standard summoning, with Musashi stating that she wouldn't stand a chance against any of the Heroic Spirit Swordmasters without the Myoujingiri Muramasa). Can ignore conventional durability with Providential Oni Poison (Is seemingly far stronger than before, and it was also strong enough to destroy provinces)

Durability: Island level (Battled Kintoki and Raikou even while weakened by poison but was beheaded by them) | Island level

Stamina: High (Servants can fight for an entire day without stopping and can continue to battle for as long as they have a steady supply of magical energy)

Intelligence: The successful leader of the oni of Mount Ooe, Shuten-douji and her followers rampaged across Japan, devouring many men, women, and children in their wake. Although she is almost always intoxicated, she remained enough of a threat to monster slayers as skilled as Minamoto no Raikou that the latter resorted to deception and poison to defeat the oni rather than outright combat. She is also a collector of rare objects and artifacts, often times appraising the spoils form her raids and attaching a particular value to them depending on their age, rarity, elegance, demonstrating a working knowledge of human culture as well.

Weaknesses: Shuten-douji cannot fight while in Spirit Form. She is almost always intoxicated, which can affect her judgment.