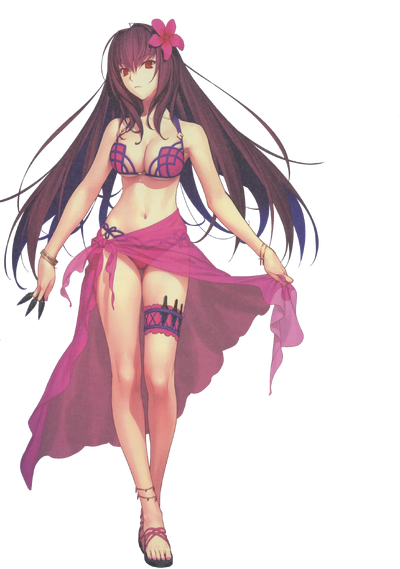 Assassin is an Assassin-class Servant able to be summoned by Ritsuka Fujimaru in the Grand Orders of Fate/Grand Order. She makes her debut in the Chaldea Summer Memory event.

Assassin's True Name is Scáthach, a warrior-queen of the Celtic Ulster Cycle who taught Cú Chulainn. Normally summoned as a Lancer, she has transformed into an Assassin after altering her own Saint Graph.

Powers and Abilities: Superhuman Physical Characteristics, Enhanced Senses, Mastery of many weapons and martial arts, Rune Magic (Allows for Forcefield Creation, Elemental Manipulation, Healing, Clairvoyance, Magic Resistance and temporary boosts to her Noble Phantasms and parameters), Possession (Non-combat applicable), Regeneration Negation with Gáe Bolg, Information Manipulation (Altered her own Saint Graph and those of the other swimsuit Servants), Immortality (Types 1, 3, and 8, Will not age or die until the Land of Shadows is completely destroyed, which only occurred after it was wiped out along with the rest of the World by Ars Almadel Salomonis) and Servant Physiology

Attack Potency: Island level (Killed multiple Demon Boars, Phantasmal Beasts who could mortally wound Fionn and Diarmuid and take the form of Servants like Kintoki and Heracles. Contributed to the defeat of Twrch Trwyth, who obtained the Holy Grail and became a Divine Beast), Small Country level with Gáe Bolg Alternative (Boasts a even higher rank than her Lancer counterpart's)

Speed: Massively Hypersonic (Boasts A+-Rank Agility, making her one of the fastest Servants)

Range: Extended melee range with her various weapons, tens of kilometers with Gáe Bolg Alternative (Her throwing range should be comparable to Cú's, who can throw Gáe Bolg forty kilometers).

Standard Equipment: Gáe Bolg Alternative and various other weapons (Including throwing knives, a segmented staff and a bow)

Intelligence: Scáthach was the queen of the Land of Shadows, mentor of many warriors such as Cú Chulainn and she has lived through a long time, acquiring the wisdom of the abyss, as a consequence of surpassing humanity, killing people, wraiths, and gods. She is particularly notable in that her Wisdom of the Haunted Grounds skill allows her to use practically any skill that isn't unique to a particular hero, allowing her to use a variety of skills and techniques from across history to overwhelm her foes and can see the future through Clairvoyance. She is also extremely knowledgeable in the use of magecraft, said to be as great of a magi as she is a warrior, and the original version of her managed to tap into the Holy Grail to summon Servants of her own.

Gáe Bolg Alternative: Soaring Spear of Kick-Piercing Death: The original usage of Gáe Bolg, which was meant to be thrown by the toes. After kicking Gáe Bolg into the air, Scáthach jumps up with it, and kicks it at her opponent. Similarly to the Soaring Spear that Strikes with Death, it splits into countless spearheads, striking her opponent as if it were a carpet bombing.

Presence Concealment: The signature class skill of the Assassin class, erasing the Servant’s presence and making it nearly impossible to detect them until they move to attack. Due to her Beach Crisis skill, she only possesses an E-Rank in this skill, making its effects fairly negligible.

Beach Crisis: A skill that determines the attention Scáthach will draw at the beach. Unlike the Beach Flower skill, she will attract gazes from both sexes due to it not being exclusively yearning.

Midsummer Mistakes: A skill denoting Scáthach's mentality. Believing it wasn't bad to merrymake once in a while, she no longer "goes easy" in most situations.

Primordial Rune (Sea): A rune bracelet strapped to her wrist, particularly specialized on the water or at sea.