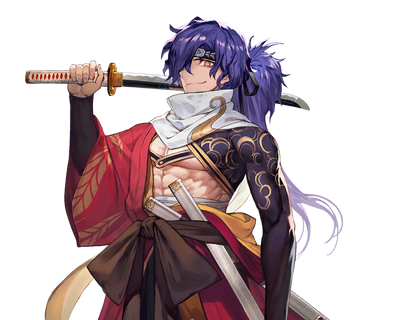 His True Name is Okada Izō, one of the four most infamous manslayers of the Bakumatsu period, a legendary swordsman who learned many styles and was involved in many assassinations, leading to his execution.

Powers and Abilities: Superhuman Physical Characteristics, Enhanced Senses, Master Swordsman (Can cross blades and hold his own against swordsmen as great as Okita Souji, and is so skilled that he can copy the sword techniques of others with only a glance), Precognition (Has an innate sixth sense that allows him to sense and avoid danger in combat), Invisibility and Stealth Mastery with Presence Concealment (Presence Concealment users with B-rank or higher are capable of rendering themselves invisible by erasing their presence, making themselves difficult to detect against Magi and even Servants unless they attack) and Servant Physiology

Attack Potency: Island level (An Assassin with the capabilities of a Saber. Fought Li Shuwen, though he was ultimately defeated).

Speed: Massively Hypersonic (Can keep up with Okita)

Standard Equipment: Two swords, a katana and a shorter sword.

Intelligence: As one of the four most infamous manslayers of the Bakumatsu period, Izō is an incredibly skilled swordsman. In terms of potential, he is considered a genius, and even the legendary spearman Li Shuwen states that his natural talent as a martial artist surpasses his. He is reputed as "One with the sword, swift and nimble as a falcon", and possesses the ability to copy the sword fighting styles of others. Due to his skill with the sword, he is capable of keeping up with famous swordsmen such as Okita Souji in combat. While he learned many different styles over the course of his life, he never trained seriously in any, leaving half-way, as he saw all styles and all swordsmen who he could ever meet as beneath him - and, in truth, they were, thanks to his genius.

Weaknesses: Izō cannot fight in spirit form, and he is somewhat arrogant, looking down upon other swordsmen. He can only copy anti-unit sword techniques that are not dependent on special properties of abilities or Noble Phantasms.

Settlement Sword (Shimatsuken): The unorthodox swordsmanship of Okada Izō, a genius swordsman with the ability to copy any style of swordsmanship and any sword techniques after just a glance. When first summoned, Izō is limited to only the techniques he knew in life, but he can grow in power and lethality by picking up new ones as he continues over the course of his summoning. There are limits to this power, however, as Izō is only capable of copying anti-unit sword techniques, rendering him incapable of reproducing Mystic Sword techniques, such as Tsubame Gaeshi. In addition, he cannot copy sword techniques that are dependent on the special properties of Noble Phantasms.

Presence Concealment: The ability to hide one's presence as a Servant. Izō's B-rank in this skill makes it sufficient for spying and allows him to even erase his presence to make himself extremely difficult to detect for Mages and even Servants, but its rank will drop considerably once he prepares to attack.

Eye of the Mind (False): Izō has the natural ability to avoid danger based on an innate sixth sense refined through combat experience. Although he possesses only a C rank in this skill, it gives him better clarity to sense danger and possible actions around him, making him one step above those who lack such an ability.

Manslayer: A practical skill in swordplay that has been refined with the entire purpose of cutting down humans and reaching victory. It is a style of sword fighting unsuited for those who have devoted their lives to seeking out the truth behind a blade.

One with the Sword, Swift and Nimble as a Falcon: The words that others used to describe Okada Izō in life and his swordplay. Though he learned many new styles of swordsmanship, he never devoted himself to any of them and left half-way, rightfully seeing all other swordsmen and all their styles as beneath him. 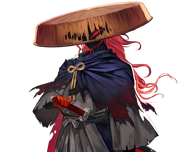