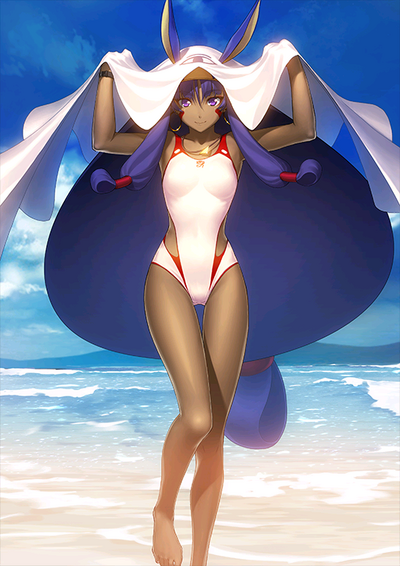 Assassin is an Assassin-class Servant able to be summoned by Ritsuka Fujimaru in Fate/Grand Order. She makes her debut in the Dead Heat Summer Race! event.

Assassin's True Name is Nitocris, the last Pharaoh of Egypt's Sixth Dynasty, who was forced to take the throne after her brothers were murdered as part of a conspiracy, before enacting her revenge on them and taking her own life. Normally summoned as a Caster, she was changed into an Assassin to conceal her own identity during Ishtar's summer race.

Powers and Abilities: Superhuman Physical Characteristics, Martial Arts, Vehicular Mastery, Magic, Pocket Reality Manipulation, Water Manipulation, Necromancy, Portal Creation, Summoning (Able to summon mummies), Enhanced Senses, Invisibility and Stealth Mastery with Presence Concealment (Presence Concealment users with B-rank or higher are capable of rendering themselves invisible by erasing their presence, making themselves difficult to detect against Magi and even Servants unless they attack), Supernatural Luck, Minor Fate Manipulation (Servants with B-Rank Luck or higher can change their own fates to evade inevitable outcomes such as having their hearts destroyed by Gáe Bolg) and Servant Physiology

Attack Potency: Island level (Fought against Artemis, Nightingale, Yan Qing, and the latter again when they transformed into Quetzalcoatl), higher with Sneferu Iteru Nile (As a B-Rank Noble Phantasm, it is stronger than C-Rank Noble Phantasms like Triple-Linked Crane Wings)

Lifting Strength: At least Superhuman (Even the weakest Servants are ten times stronger than the strongest humans)

Intelligence: Despite having her Servant Graph altered Nitocris maintains all the personality and skill of her Caster self as well as obtaining new hand to hand combat skill as an assassin mimicking Cleopatra's fighting style, able to fight in close quarters against opponents as skilled as Yan Qing

Retrieved from "https://vsbattles.fandom.com/wiki/Assassin_(Nitocris)?oldid=5721899"
Community content is available under CC-BY-SA unless otherwise noted.