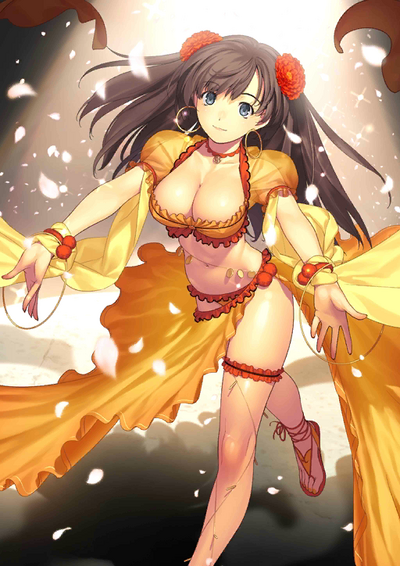 Assassin is an Assassin-class Servant Ritsuka Fujimaru can summon in the Grand Orders of Fate/Grand Order.

Assassin's True Name is Mata Hari, a Dutch spy who entranced officers with her bewitching dances, she extracted information for both Germany and France during World War I.

Attack Potency: Wall level (Mata Hari is considered an extremely sub-par Servant who isn't suited for the battlefield, having never participated in conflict herself and is so weak that she doubts that her wish will ever be granted. However, even the weakest Servants are ten times stronger than the finest athletes and can crush human skulls with their fingertips like eggshells)

Speed: Superhuman (Mata Hari is not a viable combat Servant, but as a Servant she should be ten times faster than the finest athlete)

Lifting Strength: Superhuman (As a Servant, Mata Hari should be ten times stronger than the finest athlete)

Durability: Wall level (Is a pathetically weak Servant, but even Servants the size of children are tougher than steel beams)

Stamina: Unknown (Never participates in combat, preferring to bewitch her foes instead)

Intelligence: Mata Hari is an experienced dancer and courtesan who was once called the most desirable woman in France. Bewitching men and women on stage and in bed, she was able to pry even tightly guarded secrets from the lips of high-ranking officials with her gentle touch. However, in combat, Mata Hari is woefully lacking, as she would never survive for long in a traditional Holy Grail War, a fact she bemoans as she knows that it is highly improbable for her to ever see her wish granted.

Weaknesses: Mata Hari has no actually combat experience or training and will quickly fall if pitted against anyone immune to her wiles

Mata Hari: The Girl Who Has Sunny Eyes: The crystallization of Mata Hari herself as a Noble Phantasm, she performs one of her signature dances while spreading her pheromones all around, forcibly numbing the thoughts of those in range. This Noble Phantasm will instantly entrance civilians and magi, but it will even affect Servants without skills that provide resistance to attacks on the mind or complete insanity through Mad Enhancement. Upon completion, the affected targets become Mata Hari's puppets, doing whatever she asks of them.

The effects of this Noble Phantasm last until the next sunrise and no trace of its application is left after it wears off. As a result, it can be used repeatedly against the same target(s). Furthermore, anyone who succumbs to it will be more likely to fall under its sway again should Mata Hari use this Noble Phantasm once more.