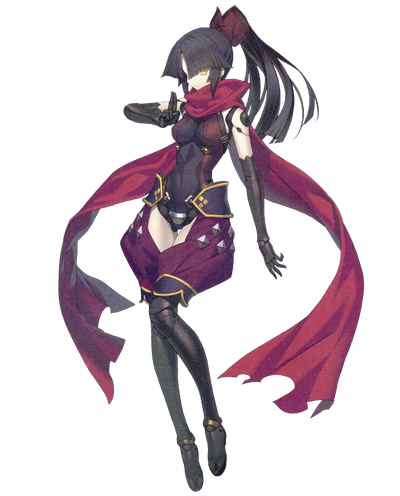 Assassin is an Assassin-class Servant the protagonist can summon during the events of the Epic of Remnant chapter of Fate/Grand Order.

Assassin's True Name is Katou Danzou, a famous ninja, thief, and spy from Japan's Edo Period. Known as "Flying Danzou" and "Kite Danzou" for her use of kites in her many missions during the final years of the Sengoku Era, her origins have been greatly disputed over the course of history. While she was famous for supposedly utilizing karakuri dolls as part of her equipment, in truth she is a karakuri doll herself, a lifeless puppet designed and molded by the sorcerer Kashin Koji and the first Fuuma Kotarou to independently conduct numerous operations without betraying his involvement in these acts. While she lacked sentience in life, her many exploits carved her name into the Throne of Heroes as a Heroic Spirit.

Powers and Abilities: Superhuman Physical Characteristics, Air Manipulation, Expert Hand-to-Hand Combatant and Assassin, Flight (Can produce and ride kites for flight), Weapon Mastery, Body Control (Can manipulate all of the parts of her body, including her rocket fists, hidden missile launchers, machine guns, and internal blades), Illusion Creation with her Noble Phantasm (Can make things seem as though they appeared or disappeared), Self-Destruction (Can self-destruct), Invisibility and Stealth Mastery with Presence Concealment (Presence Concealment users with B-rank or higher are capable of rendering themselves invisible by erasing their presence, making themselves difficult to detect against Magi and even Servants unless they attack), Enhanced Senses (Can detect heat signatures, and her vision can scope the layout of Onriedo Castle), Servant Physiology, Supernatural Luck, Minor Fate Manipulation (Servants with B-rank Luck or higher can change their own fates to evade inevitable outcomes such as having their hearts destroyed by Gáe Bolg), Resistance to Pain Manipulation (Cannot feel pain)

Attack Potency: Island level (Although she has a paltry D-Rank in Strength, she should be at least as strong as Servants like Assassin and Archer, who could parry blows from Saber). Higher with Mechanical Illusionary Art - Bull Swallowing (As a C-Rank Noble Phantasm, it should be capable of generating an A-Rank attack capable of penetrating God Hand)

Speed: Massively Hypersonic (Possesses A-Rank Agility and can clash with most other Servants without difficulty)

Lifting Strength: Class 1 (Claimed she could carry almost a ton of weight)

Durability: Island level (As a combat-ready Servant, she should be at least this tough)

Stamina: High (Servants can fight for nearly a day without rest and can continue to fight for as long as they have a steady supply of mana. They do not require food, water, or sleep to survive)

Intelligence: Trained by the founder of the Fuma shinobi clan, the original Fuuma Kotarou, Danzou is an exceptionally skilled shinobi, having completed countless missions in the name of her lord and engraving her name into the Throne of Heroes despite being a lifeless doll. While she was designed with assassination and sabotage in mind, she is a more than capable combatant, keeping her foes guessing with her wide-range of armaments, including her arm blades, missile launchers, machine guns, and rocket punch arms, switching between them seamlessly to match the situation. Her effectiveness was such that she continued to be used for five entire generations of war before she finally began losing functionality, proving her value, skill, and lethality.

Mechanical Illusionary Art - Bull Swallowing: A Mystic Code installed in Danzou by her creators, Danzou can create a massive vacuum blade that sucks in everything in range by putting her hands together and allowing them to rotate rapidly. Upon being drawn into Danzou's hands, they are subsequently pulverized by the crushing force of the vacuum until they're virtually invisible, creating the illusion that she had swallowed a bull or a similarly large object whole. She can also use this on a smaller scale to manipulate the air and create the illusion that "an object had been erased before one's very eyes" and "making erased objects appear again".

Black Arts Decapitation Method - Moonflower: Danzou's second Noble Phantasm, its effects are unknown due to her refusal to use it for being too gruesome.