VS Battles Wiki
Register
Don't have an account?
Sign In
Advertisement
in: Tier 6, Tier 6-C, Characters,
and 21 more 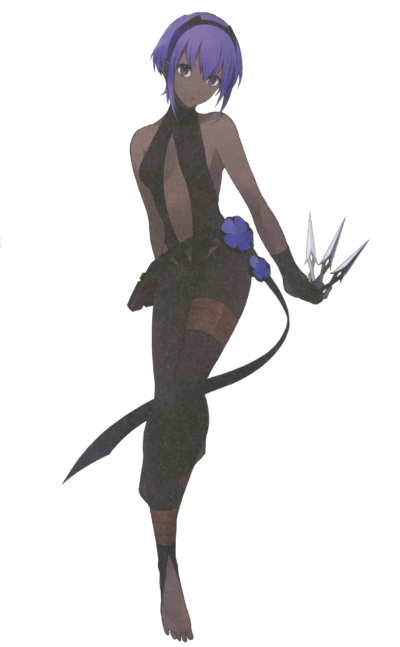 Assassin is the Assassin-class Servant of Seiji Jinga in the First Holy Grail War of Fate/Prototype: Fragments of Blue and Silver. She later forms a new contract with Manaka Sajyou.

Assassin's True Name is Hassan of Serenity, one of the nineteen Hassan-i-Sabbah. It has been said that while alive she was an expert in poisoning, the legendary "poison girl" told in many ages, many parts of the world starting from India of the BC era - fabricated by the assassination cult as a weapon, a tool for assassinations in real life. That is her identity. She has become the source of the urban legend by the name of Mary.

Powers and Abilities: Superhuman Physical Characteristics, Poison Manipulation, Invisibility and Stealth Mastery with Presence Concealment (Presence Concealment users with B-rank or higher are capable of rendering themselves invisible by erasing their presence, making themselves difficult to detect against Magi and even Servants unless they attack), Transformation (Can change the appearance of her face), Supernatural Luck, Minor Fate Manipulation (Servants with B-rank Luck or higher can change their own fates to evade inevitable outcomes such as having their hearts destroyed by Gáe Bolg), Expert Dagger Thrower and Servant Physiology

Attack Potency: Island level (Should be at least as strong as Archer, fought against Tristan alongside Hundred-Face and Cursed Arm for a period of time before being killed). Can ignore conventional durability with Zabaniya

Speed: Massively Hypersonic (She has A+ rank agility, making her faster than Saber)

Durability: Island level (Should be at least as tough as Archer, who can survive grazing blows from Saber and Lancer)

Range: Several meters with throwing knives, higher by spreading her poison to the wind (said to be capable of wiping out armies).

Intelligence: As one of the nineteen individuals to bear the title of Hassan-i-Sabbah, the Hassan of Serenity is a master of stealth, assassination, and information gathering. Her preferred method of killing involves her skillful manipulation of other mark's emotions along with her alluring appearance to lull them into a false sense of security before killing them instantly with a kiss. While her skills in direct combat pale in comparison to the other classes, she is able to hold her own in a fight and remains far superior to any assassin of the modern era.

Weaknesses: She cannot fight in Spirit Form. Hassan longs for physical contact with someone she can't kill with a touch, which can affect her judgment should she find someone immune to her poison.