VS Battles Wiki
Register
Don't have an account?
Sign In
Advertisement
in: Characters, Nasuverse, Fate,
and 21 more 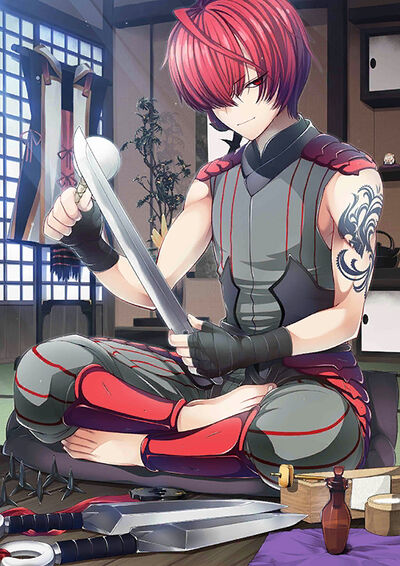 Assassin is an Assassin-class Servant able to be summoned by Ritsuka Fujimaru in the Grand Orders of Fate/Grand Order.

Assassin's True Name is Fuma Kotarou, the fifth to bear this title and served successor of Houjou Souun - Ujitsuna.

Different from Japan's representative ninja, the Iga and Kuga, there are few reference documents about the Fuuma. The fact that the Houjou family which they served dissolved during the age of warring states is probably a big reason for that. Not even which kind of ninja tool the Fuuma used is certain.

Fuuma Koutarou is descended from foreigners and, at the same time, also has the blood of the Oni kind mixed in his veins. For the sake of surviving that turbulent war period, the clan performed a thorough match manipulation and gave birth to him as the greatest masterpiece of "shinobi" - the leader of the Fuuma. An inborn chief and shinobi, the Fuuma party would thus welcome one summit.

Powers and Abilities: Superhuman Physical Characteristics, Magic, Fire Manipulation, Expert Kunai User and other types of weapons, Skilled in Assassination, Stealth, Ninja Skills, etc. with Ninjutsu, Invisibility and Stealth Mastery with Presence Concealment (Presence Concealment users with B-rank or higher are capable of rendering themselves invisible by erasing their presence, making themselves difficult to detect against Magi and even Servants unless they attack), Transformation (Can use a Ninjutsu similar to magecraft to unleash his full Spirit Origin and enhance his power), Summoning, Supernatural Luck, Minor Fate Manipulation (Servants with B-rank Luck or higher can change their own fates to evade inevitable outcomes such as having their hearts destroyed by Gáe Bolg), Soul Manipulation (After receiving energy from Danzou after her death, he is capable of killing Heroic Spirit Swordmasters and beings similar to them, such as Amakusa, who require the ability to attack their spiritual core directly to kill or properly harm. In additon, all Servants can consume souls to replenish their magical energy) and Servant Physiology

Attack Potency: Island level (Helped fighting off against Shuten and Ibaraki alongside Mash, Kintoki, Benkei and Ushiwakamaru and later against Ushi-Gozen in the events of Onigashima), Island level+ with Immortal Chaos Brigade (Is rated as a B-rank Anti-Army Noble Phantasm, which would make it comparable to the Soaring Spear that Strikes with Death)

Speed: Massively Hypersonic (Has A+ agility, making him one of the fastest Servants)

Intelligence: High, Kotaro was raised to be the leader of his clan, later becoming the leader, described as the greatest masterpiece of a shinobi, managed to directed 200 subordinates of the Fuma corps in order to sabotage the Takeda army