VS Battles Wiki
Register
Don't have an account?
Sign In
Advertisement
in: Characters, Nasuverse, Fate,
and 32 more 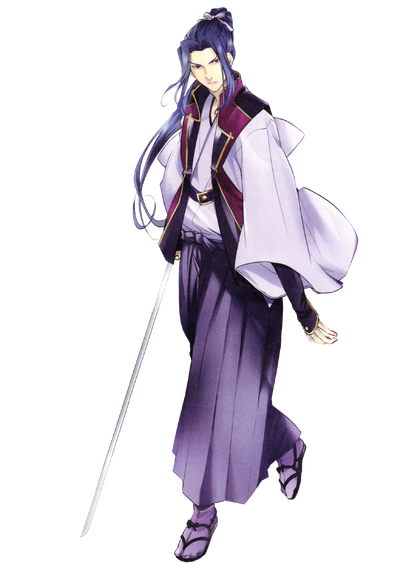 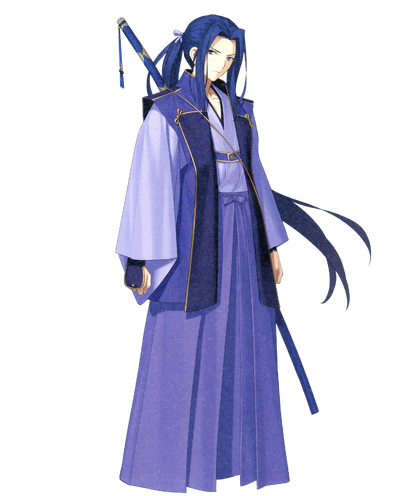 Assassin is the Assassin-class Servant of Caster, an irregularity that shouldn't exist under the Assassin class, yet summoned through Caster's machinations. His true name is ostensibly Kojirou Sasaki, a legendary Japanese swordsman, theorized to have the true name of Tsuda. However, Sasaki Kojirou never existed; instead, the Servant summoned is a nameless samurai who dedicated his entire life to the mastery of swordsmanship, his sheer skill becoming a legend on the level of a Noble Phantasm on its own. His life resembles the legend of Sasaki Kojirou, and so he is summoned under his name and with his legend.

He appears in Fate/Grand Order as both his original summoning as an Assassin able to be summoned by Chaldea and as a Nameless Saber who duels Musashi Miyamoto in The Tournament of the Seven Blade-Master Heroic Spirits during the events of the Shimosa sub-singularity.

Superhuman Physical Characteristics, Enhanced Senses (He has exceptional eyesight, superior to Archer, allowing him to discern the dimensions of Excalibur through Invisible Air. Is able to hear heartbeats), Regeneration (Low-Mid over time; can regenerate from a serious wound that blasted open his chest and exposed his ribs), Stealth Mastery and Invisibility (Can conceal himself with Vitrification), Extrasensory Perception (Can perceive Musashi’s use of Zero), Precognition (Has an innate sixth sense that allows him to sense and avoid danger in combat), Master Swordsman (His swordsmanship is so refined that it has reached the level of a Mystery beyond human possibility, allowing him to launch three perfectly simultaneous slashes from three different directions), Supernatural Luck, Minor Fate Manipulation (Servants with B-rank Luck or higher can change their own fates to evade inevitable outcomes such as having their hearts destroyed by Gáe Bolg) and Servant Physiology, Resistance to Information Analysis (Knowledge of Respect and Harmony makes his attacks "unreadable" and prevents his opponents from ever analyzing or getting used to his attacks

All previous abilities other than Servant specific ones, in addition to, Possible Dimensional Travel (Stated he could move into and from different "rifts of history"), Aura, likely Fear Manipulation, Paralysis Inducement (Should have superior "Sword Ki" to Saber Emperio), Durability Negation, Fate Manipulation and Probability Manipulation

Attack Potency: Island level (Can fight Saber, Archer, and Lancer. Would've killed Saber with Tsubame Gaeshi if it landed, and can just barely redirect blows from Berserker) | At least Island level, likely Large Island level (Physically on par with Saber Emperio) | Unknown, likely Island level+ (His skills had surpassed time, space and existence, turning his sword into a blade that accepts countless possibilities, and becomes one with Endlessness. He wields a sword of infinity, designed to create a future that not even gods or the Buddha could evade. Tenma Musashi, counterpart of Zero Musashi, were comparable to Summer 4 Artoria, who is comparable to the forces of 5 Servants and able to stomp any Servants that she can come across, also superior to Numeral of the Saints Gawain boosted even further by Aloha Shirt)

Speed: Massively Hypersonic (Saber struggled to keep up with him and every one of her blows was parried or perfectly dodged. Intercepted Archer and proceeded to trade blows with him after) | Massively Hypersonic (Comparable to Musashi Miyamoto) | Immeasurable (His skills transcend time, space and existence, leading him to a realm of nothingness with no time or space, devoid of thought and feeling, beyond the rift of reality and dreams. In this realm, which is explicitly not a pruned or parallel world, every moment his sword clashes with Musashi's, infinite possibilities would play out and infinity and zero clash endlessly. Kojiro's principle of Infinity is such that not even the Buddha and the Gods, higher dimensional beings who transcend space-time and view it all as a book, could not escape it)

Stamina: High. Due to his irregular nature, he can survive for twenty days without a Master, and even if he had his heart destroyed, he'd be able to continue fighting for a brief period of time. | Unknown

Intelligence: Assassin is a peerless swordsman, having reached a realm transcending the realm of men through nothing but hard work and single-minded dedication. He is stated to have the greatest swordsmanship amongst all of the Servants in the war, far surpassing Berserker, who is more than qualified for the Saber class, and Saber, who is renowned in life for being one of Britain's finest knights. Even The King of Heroes is no match for him in a contest of swordsmanship. Furthermore, he can clash evenly with his chief rival, Musashi Miyamoto, who had also reached the pinnacle of swordsmanship and could collapse all possibilities into a single outcome, with their respective skills being stated to transcend time and space itself. As such, his skill as a swordsman is stated to have reached the state of true emptiness, reaching the unreachable existence of Infinity. Personality-wise he is also serene and calculating, rarely losing his composure and allowing him to easily perceive even the slightest weaknesses in the target with his keen eyesight, even outmatching the similarly perceptive Archer in close combat. He was able to achieve a technique on the level of True Magic, something that many Mage families work for generations just to approach obtaining.

Weaknesses: The Monohoshi Zao, while a finely crafted weapon, is still mundane. This means that it will chip or bend if forced to clash directly against something not made by men, like Saber's Excalibur. Tsubame Gaeshi can only be performed properly if performed on level ground and will become imperfect if the Monohoshi Zao is bent or chipped in combat, leaving gaps through which a swift enough opponent can dodge. Assassin is not particularly interested in finishing his opponents due to his transient existence and is more than likely to attempt to prolong a proper sword fight in order to enjoy it. | None notable.

Presence Concealment: The capacity to hide one's presence as a Servant. It is a common skill for the Assassin class. Suitable for spying, though low enough that other Servants would easily detect him if he was nearby. He does not have it by virtue of being an Assassin, but it is an intrinsic ability of his as a martial artist that allows him to cut himself off from the world.

Eye of the Mind (False): Assassin has the natural ability to avoid danger based on an innate sixth sense refined through combat experience, so much so that it borders on precognition. Assassin's rank is A, meaning that it is so refined that the effects of visual obstructions are reduced, allowing him to gauge the exact length and width of Excalibur despite being rendered invisible by Invisible Air. He is said to have the best eyesight amongst the Servants summoned for the Fifth Holy Grail War.

Knowledge of Respect and Harmony: Assassin's techniques cannot be properly perceived by his opponents no matter how many times they're demonstrated. As a result, it is impossible for an opponent to get used to them. Thus the tenth, hundredth, or even thousandth encounter against him will feel the same as the first, so his techniques will always retain their effectiveness against his opponents.

Vitrification: Due to Assassin's serene state of mind, he is immune to mental interference. In addition, his B+ Rank in this skill allows him to conceal his presence if he pleases, allowing him to simulate the True Assassin's Presence Concealment skill to a limited extent, making it difficult for even Servants to detect along with his lack of mana and a true Noble Phantasm.

Hiken: Tsubame Gaeshi: The legendary technique of the swordsman Sasaki Kojirou, who is said to be capable of cutting down a swallow mid-flight. Through human means, he achieved a Mystery on the level of a Noble Phantasm, a skill mindlessly refined to the point that it has become a legend in itself. Under the Fuyuki system, it is not acknowledged as a Noble Phantasm but is instead a skill. However, it is registered as such under the FATE system. The technique, through an application of the Second Magic, bends the laws of physics to make three perfectly simultaneous slashes from three separate directions. It is a sword of infinity that renders the finite existence of a single slash into multiple possibilities to create a future that not even the gods can escape from. In Fate/Unlimited Codes, Assassin can use a technique called Hikan: Tsubami Mai, which is a series of six high-speed slashes he performs on his enemy before getting into position and ending it with Tsubami Gaeshi.

It is Assassin's most important technique. He never normally takes a stance but does so for Tsubame Gaeshi. The technique is complemented by the range offered by Monohoshi Zao, allowing him to cut off escape. Even if one strike is blocked, the other two will land. As it is just a skill refined to the level of a Mystery, Assassin can use it without expending any more magical energy than he needs to move. The only requirement for its execution is level ground, as performing it on an improper level ground will only cause it to form two slashes rather than the three it normally should make.

At the peak of this technique, instead of just attacking with three overlapping possibilities, he attacks with infinite answers. Normally, within the limits and laws of Space and Time, one would be bound to a single attack existing at any given time, but his skills have long surpassed Space, Time, Existence, Essence, etc. Using Infinity, his blade has become one with Endlessness. Accepting countless possibilities at once, and creating many more. This is the utimate purpose of Kojiro's Swallow Reversal, to create a future that not even the gods nor the Buddha can avoid. 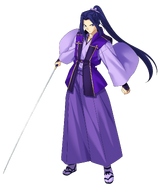 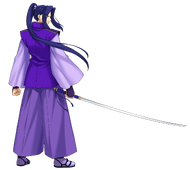 Assassin's versus cut-in in Fate/Unlimited Codes