VS Battles Wiki
Register
Don't have an account?
Sign In
Advertisement
in: Tier 6, Tier 6-C, Characters,
and 23 more 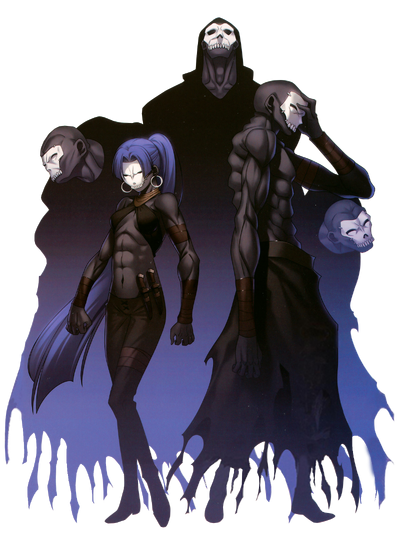 Assassin is the Assassin-class Servant of Kirei Kotomine during the Fourth Holy Grail War.

His true name is Hassan-i-Sabbah, or, more specifically, Hundred-Faced Hassan. He was one of the nineteen people to hold the title "Old Man of the Mountain", as the Hashshashin leader. In life, he was a candidate to become the next Hassan-i-Sabbah along with the nameless Assassin. He was later chosen due to fear of the latter's overzealous behavior. However, the true reason was due to the latter never creating her own original Zabaniya, marking them the last of the Hassans to be able to summon.

Gender: Varies; originally male, but each of his incarnations differ

Powers and Abilities: Superhuman Physical Characteristics, skilled in Martial Arts, Invisibility and Stealth Mastery with Presence Concealment (Presence Concealment users with B-rank or higher are capable of rendering themselves invisible by erasing their presence, making themselves difficult to detect against Magi and even Servants unless they attack), Duplication (His spirit contains a hundred persona and can manifest up to eighty of them with separate bodies, each with specialized skills and abilities) and Servant Physiology

Attack Potency: Island level (Even when divided into eighty bodies and individual personas being weak compared to other Servants in the Fourth Holy Grail War, they are able to kill far stronger Servants by overwhelming them through numbers and swarming them. Even when fully divided the Gozul the Strong persona was able to brute strength overpower Kintoki and Beowulf at the same time)

Speed: Massively Hypersonic (Comparable in speed to other Servants. Makul the Quick was able to beat Atalanta in an obstacle race)

Lifting Strength: Class K (Comparable to Martha who stopped a speeding train, Achilles who stopped a rolling 300 ton jumbo jet, and Asterios who swam carrying the 100-150 ton Golden Hind galleon ship while injured) at the peak of their potential, though they grow weaker as they duplicate themselves into more individual forms)

Intelligence: As one of the nineteen Hassan-i-Sabbah, Assassin is exceptionally skilled in all fields expected of an assassin such as stealth, disguise, silent-killing, and surveillance. In addition to these skills, Assassin managed to acquire many more skills by compartmentalizing his mind into separate personalities, allowing him to access these skills at any time by switching between characters and granting him the ability to convincingly disguise himself as practically anyone, as young and old men, women, and even children, which manifests as Zabaniya: Delusional Illusion. Also, his skills in hand-to-hand combat far outstrip any average human. However, they still pale compared to the other Servant classes' combat ability, and he will quickly be overwhelmed should he directly face one of them. Moreover, his skills are divided amongst his personalities, requiring them to regroup to best utilize their knowledge.

Weaknesses: Assassin's abilities and parameters are divided amongst incarnations, growing weaker as more Assassins are created. The Assassins aren't a hive mind and have no telepathic connection, so they have to return to a single place to share information.

Zabaniya: Delusional Illusion: The Noble Phantasm of the Hundred-Faced Hassan, used on himself rather than an opponent. Assassin is usually a singular entity, but he possesses a compartmentalized soul and multiple personalities that allow him to divide his spirit into up to eighty different Assassins, each with specialized skills and a distinct body. There are men and women, giants, and children. Their only shared characteristics are their masks, race, and black cloaks. They vary in personality, strengths, and weaknesses, and if one dies, they vanish, and their characteristics and skills are no longer accessible to the group as a whole. Some are glory hounds and those who have no skill in assassination despite their class.

They can be split up to gather information, using their Presence Concealment to avoid detection and operating as a spy network. They lack any telepathy and thus must gather to share information. However, their parameters are divided between bodies, causing them to become weaker and weaker, and a single Assassin is no match for a Heroic Spirit. Even an army of them doesn't stand much of a chance, making an all-out attack with all of the Assassins a last resort to take out a vulnerable target.

Presence Concealment: The ability to hide one's presence as a Servant. The Assassins' A+ rank proficiency in this skill renders them virtually impossible to detect for even Servants unless they decide to attack, in which case this skill's effects sharply drop. Each Assassin maintains the full power of this skill regardless of how many bodies they split into. The use of this skill has allowed them to infiltrate areas with bounded fields set up around them and observe the fight between Arturia and Diarmuid without either of them noticing their presence.

Battle Retreat: A skill whose canonical effects are unknown.

Expert of Many Specializations: The knowledge of many professional skills; in Assassin's case, thirty-two in total, including tactics, academia, espionage, assassination, deceiving, and rhetoric. Assassin utilizes this ability by switching between his different personalities, though the skills are divided amongst his incarnations when he uses Zabaniya. To fill in the gaps made by thirty-two powers divided between eighty Assassins, other less useful skills such as impersonating Toyotomi Hideyoshi and identifying the sex of chicks come into play.

Librarian of Stored Knowledge: An ability that allows for the clear recollection of memories through a Luck check, even details of memories that were not consciously processed at the time. Assassin utilizes it by distributing his memory processing amongst his personalities. 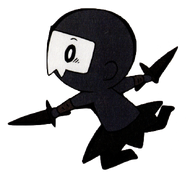 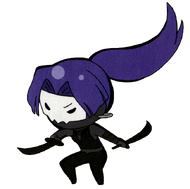 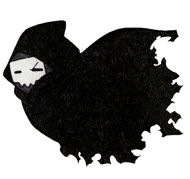