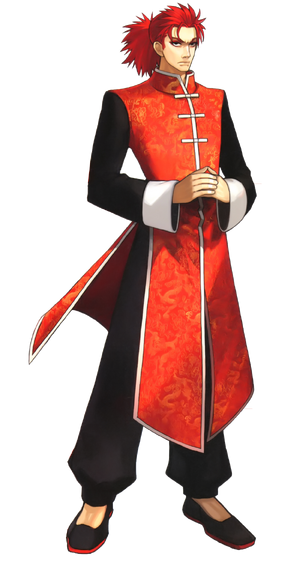 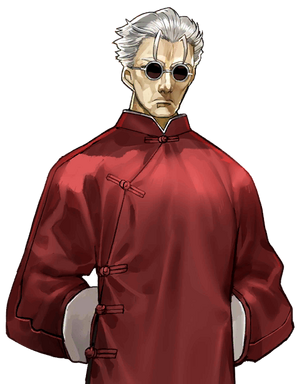 Assassin is the Assassin-class Servant of Julius B. Harvey during the Moon Cell Holy Grail War.

His true name is Li Shuwen, a legendary Chinese martial artist who became a legend through his skills. His skill in Bajiquan is exemplary, and he is renowned from his legend as one who only needed a single blow to kill his opponents; for Li Shuwen, no second strike is needed. His skill with the spear is similarly famous, gaining him the moniker "Divine Spear Li", qualifying him for the Lancer class as well.

In Fate/Grand Order, a much older living counterpart of Li Shuwen appears during the third Lostbelt, Land of Unified Knowledge: S.I.N. Brought out of cryogenic sleep by Qin Shi Huang, he serves as the chief of his royal guards and fought against Chaldea's forces to stop them from reaching the emperor.

Age: 70 at time of death of his real-life counterpart (Is summoned in his prime)

Powers and Abilities: Superhuman Physical Characteristics, Enhanced Senses (He is supernaturally aware of his surroundings), Servant Physiology, Master in Martial Arts, Qi Manipulation (Though this is technically his magical energy; he can use it to reinforce his body and increase his strength), Invisibility and Stealth Mastery with Sphere Boundary (He can blend into the World through meditation and the use of his Qi to make himself completely invisible and indisernable to even those who sense others by magic)

Attack Potency: Island level (Has B-rank strength and can take on even Saber-class Servants with his hands alone. Can fight against Nero, Tamamo, and Archer), higher with Fierce Tiger Forcibly Climbs a Mountain. No Second Strike ignores conventional durability (By engulfing an opponent with his Qi, he disrupts their nervous, circulatory, and magical systems, throwing them into a state of panic and stopping their heart). | Island level (Even when he was still a human, he easily overpowered Tamamo Vitch and fought against Mordred and Red Hare though he was ultimately defeated). No Second Strike ignores conventional durability

Intelligence: Li Shuwen is a legendary practitioner of Bajiquan, known as a "master among masters", whose skill is so great that he can kill his opponents in a single blow. His awareness of his surroundings is so great that through the use of his chi and meditation, he can become completely invisible and nearly completely undetectable by normal means, allowing him to easily kill other Servants without being noticed. His skill is such that even as an unarmed Lancer, he can easily outmaneuver and outskill the much more powerful Beowulf without taking a single blow. In Fate/Grand Order, his age only hones his skills even further, being described as the peak of his physical ability and allowing him to fight a master swordswoman like Mordred and the omnidisciplinary Red Hare on equal footing.

No Second Strike: The essence of Li Shuwen's martial arts, embodying the maxim of "For Li Shuwen, no second strike is needed." in the form of a skill. It is not a true Noble Phantasm, but his sheer skill sublimated as something close to one, a technique created to instantly kill any target with a single blow. All of his hard strikes, even those meant as feints, are capable of killing an opponent. While he is exceptionally strong, the killing power comes from his Qi (a cultural term for Od, his personal magical energy), focused into his blows with enough force to engulf an opponent. It's been speculated that he used his Qi to create his own territory. Regardless, the effects of being engulfed with Qi are brutally effective; an opponent is extremely disoriented and put into a state of severe tension and paranoia, putting their nervous system under great strain and usually stopping their heart. On top of damaging his opponent's nervous and circulatory systems, it damages their Magic Circuits, disrupting them and, in the case of Servants, cutting off their links to their Masters.

Fierce Tiger Forcibly Climbs a Mountain: One of Li Shuwen's secret techniques, the pinnacle of his Bajiquan techniques. As opposed to No Second Strike, which aims to stop his opponent's heart, this technique is focused entirely on causing physical damage. It is a series of powerful consecutive attacks, each of which draws energy from the Earth that enables Li Shuwen to smash through doors, walls, the sturdy walls of dojo gates and even those of Servants when he is summoned as one. In the setting of Fate/Extra, this technique started to become usable after Li Shuwen turned into a Berserker-class Servant due to losing his ability to read his opponent's pulse and mind from losing his sanity and as a result of his master's actions.

Chinese Martial Arts: A Chinese system of skills refined and pursued in the goal of becoming one with the universe. It is a skill said to be difficult in terms of learning at the highest level and, unlike other skills, one with a rank of A is at a level where they can be said to have "finally learned it". At A+++ rank, Li Shuwen is a master among masters, unparalleled in life and death as one of the greatest masters and teachers of Bajiquan including the spearmanship branch of the Bajiquan fighting style seen when summoned as a Lancer.

Intersection of Yin-Yang: A skill representing the older Li Shuwen's control over his emotions to switch his nature between the ferocious "Yin" and the calm "Yang". While he leans more towards Yang in his old age, he has not lost his cold-hearted nature in combat and can switch to Yin in an instant to slaughter his enemies.

Sphere Boundary: A technique that allows the user to blend into the world around them through meditation and the utilization of Qi. Through these abilities, Li Shuwen can read his immediate environment in fine detail, perceiving every aspect so that he can best minimize the impact of his existence. This ability allows him to become effectively completely invisible and indiscernible, and as it is reached purely through the mastery of martial arts, it produces no magical energy and is thereby unrecognizable by magical means. It is a skill that has far surpassed human possibility.

Like Presence Concealment, its effects drop when he prepares to launch an attack, but he is still effectively invisible and an opponent who dodges an attack like this will still perceive it as invisible; even then, this is extremely difficult, requiring sufficient skill. Of course, if Li Shuwen doesn't prepare for an attack, he will be completely unnoticeable even as his fist makes contact with a target. Combined with No Second Strike, this allows him to effortlessly, immediately kill other Servants.

Sphere Boundary (Zenith): A further evolved version of Sphere Boundary achieved by the older Li Shuwen, representing the peak of the skill. He is now capable of making use of it in the middle of a heated battle, disappearing in the blink of an eye and easily getting the drop on his enemies.

Veteran: A skill belonging to Li Shuwen's older self, whose canonical effects are currently unknown.