VS Battles Wiki
Register
Don't have an account?
Sign In
Advertisement
in: Characters, Fate, Nasuverse,
and 26 more 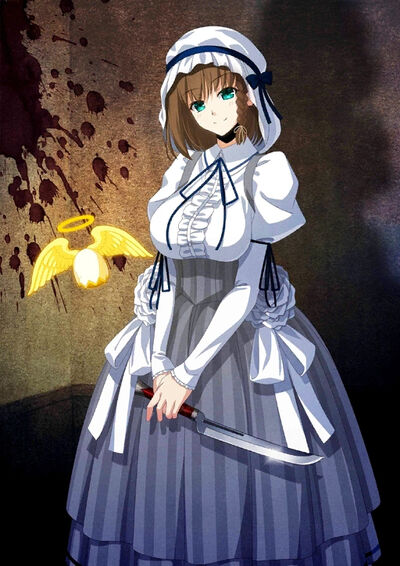 Her True Name is Charlotte Corday, formally known as Marie-Anne Charlotte de Corday d'Armont. She was a woman known for her assassination of Jacobin leader Jean Paul-Marat during the time of the French Revolution. A lively girl with a hobby for reading, she was originally going to spend her days in her abbey and have her name left unwritten in history. But her fate changed due to the abbey closing down in the middle of the French Revolution, eventually later on putting her in the path to assassinate Marat, whom she regarded as the source of all the chaos in France. Her thoughtless plan would have never allowed her to get close to Marat, let alone kill him, but through various circumstances, coincidences and sheer luck got her to where she needed to be and thus her assassination was successfully paid off.

Though shortly after arrested and sentenced to the guillotine, with Charles-Henri Sanson as the man in charge of the execution, she never once felt any fear or anger for what she did or what her ultimate fate is to be, maintaining a gentle and brave attitude to the very end. Thus with her beautiful looks and the skill to plan out an execution all on her own, she left her name in history and was later praised as the "Angel of Assassination".

Superhuman Physical Characteristics, Competent knife wielder and thrower, Energy Projection with her "angel", Empathic Manipulation (Can reduce the wariness of those she meets or around her), Stealth Mastery (Assassin-class Servants can mask their presence with Presence Concealment, making them extremely difficult to detect until they attack), Supernatural Luck, Minor Fate Manipulation (Servants with B rank luck are able to overturn inevitable outcomes such as having their heart pierced by Gáe Bolg), Servant Physiology, Resistance to Mind Manipulation and Pain Manipulation (Her Determination of Steel grants her protection against anything that attempts to affect her mind, as well as completely blocking off her sense of pain)

All previous abilities plus Nanotechnology (Most Servants in Atlantis managed to get nanomachines from the remains of the Gods, giving them the ability to heal themselves and increase their capabilities in combat), Electricity Manipulation and Transformation (Was transforming her body into metal and emitted electricity when her nanomachines went berserk), Pseudo-Battle Continuation (Gained an ability to not die by fatal injuries as long as her mission is accomplished), Aura (Has aura of bloodlust with Zeus's nanomachines), Resistance to Disease Manipulation (Nanomachines gives resistance to diseases)

Attack Potency: Island level (Despite her E Rank strength, she utilizes her knife for close combat similar to Ryougi Shiki) | At least Island level (Managed to kill one of the nanomachines amped soldiers and a cerebrus, and killed Odysseus with help from her Noble Phantasm)

Intelligence: Though Charlotte was a woman unassociated with assassinations or with a connection to the revolution itself, she was revered so for the role she took in the assassination of the Jacobin leader Jean Paul-Marat. She managed to create a plan that, due to being not deeply thought about much, would not have allowed her to be able to complete the act were it not for various circumstances and factors that lead her to Marat and complete her assassination. This carries over even as a Servant, where Charlotte is capable of having others lower their guard due to her looks and personality, leaving themselves open for her to kill them. She also carries throwing knives which can be used to throw at a distance from her enemies and, with a strange life form that accompanies her, can either shoot energy beams or use itself as a distraction for Charlotte to come behind and stab her enemy.

Le Rêve Ensoleillé: Love to the Homeland, a Dream of Drowning: The Noble Phantasm of Charlotte Corday. It is a warm and peaceful assassination committed by Corday, who was admired after her passing as the Angel of Assassination. Due to her humble and peaceful nature, no hint of killing intent is felt from or comes off from her until the verge of the killing moment. Unlike most assassination techniques, it is hard for even those with Instinct or Eye of the Mind skills to easily dodge this due to her looks, words and personality, which strengthens the success of the assassination itself the more one acknowledges them.

Presence Concealment: The signature class skill of the Assassin class, erasing the Servant's presence and making it nearly impossible to detect them until they move to attack. At C-Rank, Charlotte is difficult for a human to detect and can spy while hidden and undetected, but she will be immediately rendered visible when she begins to attack. However, due to its rank, Servants will be able to discern her position.

Angel of Assassination: The namesake people have given her after her death, praising her for her looks and skillful planning in her assassination. She goes with the flow of luck and reduces the wariness of all people she meets or is around her.

Determination of Steel: A skill granted from her disposition to assassinate based on her decision, despite having no connection to the revolution or assassinations. While not as severe as Dantès', she also possesses the skills combined effects of "Bravery" and "Calm and Collected", granting her resistance to mental interference as well as blocking off her sense of pain and boosting the damage she inflicts in melee combat while also keeping her composure no matter what circumstance she's in.

Ludicrous Planning: A skill named after the very assassination plan she created and executed on her own, a very thoughtless plan that was only successful due to the various circumstances of luck and other factors on her side that allowed her to achieve this. Though a D+-rank skill, it can rise up to B when combined with her Angel of Assassination skill.