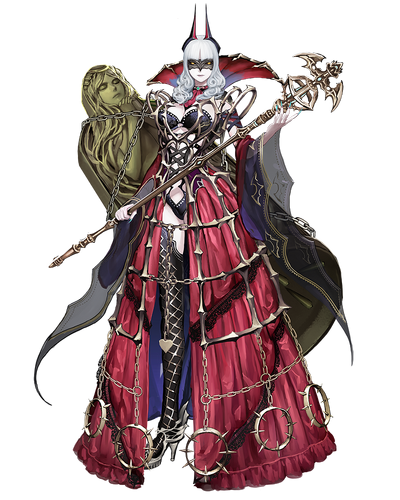 Her true name is Elizabeth Báthory, summoned not as an innocent child, but in her adult form as the vampire Carmilla, a fictional figure who was based on her. Known as the Blood Countess, Carmilla slaughtered hundreds of women in life and bathed in their blood in pursuit of eternal youth, cementing herself in infamy.

Attack Potency: Island level (While she only has D-rank Strength, she can fight against other Servants and injure them with her normal attacks, and should thus be somewhat comparable to Archer. During Orléans, she was able to fight against her younger self while under the effects of Mad Enhancement). Higher with Phantom Maiden (A C-rank Anti-Unit Noble Phantasm, and C-rank Noble Phantasms are comparable to A-rank attacks, which can injure Berserker).

Speed: Massively Hypersonic (Can keep up with other Servants in combat)

Stamina: Very high. Other Servants can fight for nearly an entire day without stopping.

Intelligence: Years upon years spent torturing and excruciatingly killing young women have granted Carmilla even greater skill in torture than her younger self, and she is quite intelligent otherwise as well.

Weaknesses: Carmilla cannot fight in spirit form, is incredibly arrogant and suffers from crippling claustrophobia due to her death in life.

Phantom Maiden: Phantasmal Iron Maiden: Carmilla's Noble Phantasm, the famous torture tool said to have been used by Elizabeth Báthory, an iron maiden born from the imaginations of the masses, who remember it as an esteemed killing weapon used to slaughter young girls. With its activation, Carmilla manifests a massive iron maiden above her opponent, which swings shut on them, impaling them on its spikes before it moves to open above her, covering her in the blood of her victim and rejuvenating her thanks to her Blood-Sucking skill. Due to Carmilla's legend as one who preyed on women, it is extra effective against female opponents.

Presence Concealment: The ability to hide one's presence as a Servant. Carmilla, more of a serial killer than an assassin, has a low rank of D, as the reason that her murders did not come to light much earlier was because of the size of her territory and her position as a noble. While it remains suitable for spying, other Servants can immediately detect Carmilla even when it's active.

Blood Bath: A skill whose canonical effects are unknown.

Blood-Sucking: The ability to drink another's blood to replenish one's health and magical energy. An inherently vampiric ability that Carmilla can use to recover her strength and even rejuvenate her skin.

Torture Techniques: The possession of exceptional skill in torture, granting bonus modifiers to damage when using torture tools, and adding more and more damage due to the bleeding it causes. In Carmilla's case, it further boosts her damage when she's fighting women, and she has amassed even more skill and experience in these techniques than her younger self.

Retrieved from "https://vsbattles.fandom.com/wiki/Assassin_(Carmilla)?oldid=5722225"
Community content is available under CC-BY-SA unless otherwise noted.