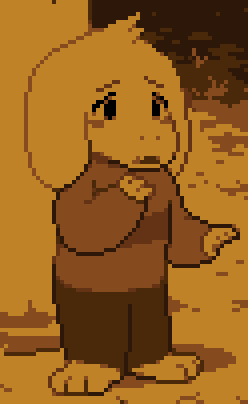 Asriel Dreemurr is the deceased son of King Asgore and Queen Toriel, who is repeatedly mentioned in backstory and by other characters you encounter in the Underground, eventually making his appearance during the game's true ending. Many years ago, not too long after monsters had been forced into the Underground by humanity, Asriel was the one who discovered Chara, the original Fallen Child and took them back to his parents. The King and Queen took the child in, raising them as their own. Very soon, Chara became Asriel's closest and only friend. However, the prince soon noticed his adopted sibling's vehement hatred for humanity, and while he turned a blind eye to it at the time, he speculated that the child's reasons for running away from home in the first place were not exactly the most pleasant, clearly leaving a deep wound in their psyche that never healed.

Age: Unknown (Pre-teen at his time of death, but his current age is unknown)

Classification: Prince of the Underground, Boss Monster, The Absolute GOD of Hyperdeath! (Asriel picking this title for himself shows that while his power is incredible, he's still just a kid)

Resistance to Memory Erasure and Soul Manipulation (Would've been unaffected by the erasure of Frisk's memories from everyone had he succeeded in destroying everything, Has virtually every monster soul in the underground including the 6 human souls, which all can withstand SOUL damage)

Attack Potency: Multiverse level (Dwarfs Photoshop Flowey in power by an infinite amount, who was able to effortlessly create and destroy numerous timelines in his fight against Frisk) | Multiverse level (Superior to his previous self by an immense amount, though the exact degree is unknown)

Speed: Unknown (Superior to Photoshop Flowey) | Unknown (Far superior to Frisk and to his previous form)

Durability: Multiverse level (Completely unable to be harmed by Frisk. Checking him reveals that his attack and defense stats are infinite and implies he is impossible to harm which instead forces Frisk to hold out against him) | Multiverse level

Intelligence: Immensely high. Asriel/Flowey is incredibly clever, being able to manipulate many of the game's characters into doing exactly what he wants (even across different timelines), due to living out almost every possible outcome and knowing exactly what certain individuals will do

Weaknesses: A kind soul with enough Determination can reach out and make him remember who he once was. If Monsters are not determined to kill their foe, and is facing against a foe with a strong soul and has murderous intent, their defenses will weaken.

Key: Using a small fraction of his power | Full Power

The Lost Souls who are summoned during the fight.

Agnès Oblige (Bravely Series) Agnès' Profile (Asriel using a fraction of his full power and Composite Agnès were used, and speed was equalized)

Alien X (Ben 10) Alien X's Profile (Asriel was using a fraction of his power, and speed was equalized)