VS Battles Wiki
Register
Don't have an account?
Sign In
Advertisement
in: Tier 7, Tier 7-C, Tier 6,
and 31 more 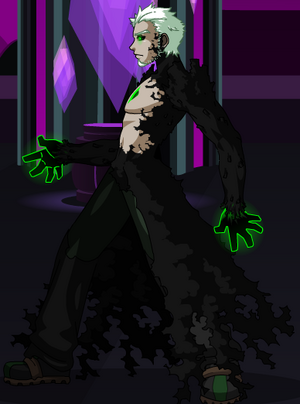 Envy is the former Soul Ally of Tomix and a corrupted elemental spirit that is responsible for creating the other elemental spirits resulting in the corrupted spirit incident involving Tomix, resulting in his death. Aspar then revived Tomix and ended up being his Soul-Ally under the name of Aspar and aided him with his efforts to defeat Greed. After Greed's banishment, it is revealed that Envy had only stuck close with Tomix for the sake of finding someone who can easily be weakened and sought to possess him in order to manipulate the Void Core. Envy's true desire is to gain friends and had either wanted to gain physical form in order to interact with other humans, or to have everyone turn into spirits so that he can make friends without the need to possess anyone.

Attack Potency: Town level (Should be as powerful as Greed and Tomix) | Island level (Can match a late-game Hero), bypass durability with Soul Burst. higher with the power of the Ynnungaap Core (Threatened to destroy all life on Lore)

Speed: FTL (Kept pace with both Tomix and the Hero)

Range: Town | Continent on his own, Planetary with Ynnungaag core

Intelligence: Envy is very intelligent and manipulative given that he has been using Tomix for 13 years.