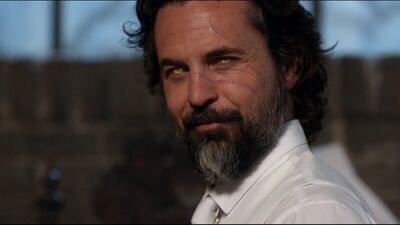 Asmodeus was the youngest among the Princes of Hell, the first generation of demons after Lilith, created by Lucifer himself.

They acted as generals of Hell until Lucifer was imprisoned. Despite being the rightful heirs to Lucifer's throne, Asmodeus and his brothers Dagon and Ramiel opted to retire on Earth with only Azazel assuming rule over Hell to continue their father's work. Asmodeus is the current King of Hell.

Attack Potency: Unknown (Defeated Castiel and a weakened Lucifer with ease. Absorbed a small portion of Gabriel's power, but was very casually dispatched by him in the end)

Range: At least Planetary with teleportation.

Weaknesses: The Colt (It can kill Princes of Hell)