VS Battles Wiki
Register
Don't have an account?
Sign In
Advertisement
in: Tier 6, Tier Low 6-B, Tier 2,
and 75 more 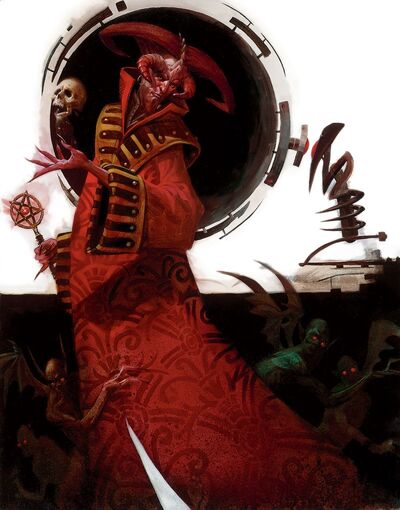 Asmodeus is an Archdevil and the current ruler of hell in Dungeons and Dragons. His origin is clouded in myth and lies. Ranging from a fallen Solar who stole a shard from the Abyss to kill his creator god to a primordial being who helped shape the multiverse itself. No matter his origin, his strength and intelligence allows him to rule the Nine Hells with an iron fist and his goal is nothing short of complete control of the multiverse.

Name: Asmodeus, Lord of Nessus, The Lord of the Ninth, The Cloven Old Hoof and Horn, The Raging Fiend, Lord of Lies, Supreme Master of the Nine Hells, The Archfiend, Prince of Evil

Age: Unknown. At least existed when the Abyss wasn't fully formed and the Nine Hells weren't conquered yet. Some origins say that he's older than the multiverse itself.

Superhuman Physical Characteristics, Abstract Existence (As Outsiders, angels (and devils, as Asmodeus would later become) are purely abstract in their physiology, lacking any biology in a traditional sense), Immortality (Types 1 and 4; Outsiders, when slain outside of their home plane, will drop their essence back into their own plane of existence to be reborn, typically a century later for lesser Outsiders and potentially instantly otherwise), Regeneration (Low-Mid), Magic, Reality Warping, Holy Manipulation, Subjective Reality (Holy power is, as Sertrous has taught, more just force of will and belief in an idea than power granted by a god), Life Manipulation (Able to animate objects and heal), Power Bestowal (Through the spell Aid, Greater Restoration, and lay on hands), Self-Sustenance (Types 2 and 3, Doesn't require food, water, or sleep), Power Words (Can stun, blind, or outright kill a creature by speaking), Light Manipulation, Dimensional Anchor (Can prevent teleportation and extra-dimensional travel), Power Nullification (Limited to Magic for Greater Dispel, Can remove curses, can remove Statistics Reduction, can nullify diseases, nullify fear effects, and nullfy mental effects), Holy Manipulation, Sealing (The Imprisonment spell allows you to freeze someone in time, create a pocket reality warded against Multiversal+ range and lock them in a magical sphere that can't be teleported out of), Invisibility, Summoning, Shapeshifting (limited to being under 9 feet), Necromancy, Statistics Reduction (Can drain stamina), Non-Physical Interaction, Creation (Can create blades and can make a magical effect permanent), Earth Manipulation (Can create Earthquakes), Mind Manipulation (Can mind control multiple different beings), Resurrection (Can resurrect other beings), Reality Warping (Via Wish), Extrasensory Perception (Can detect Chaos, lies, snares, pits, see through invisibility, and see through magical illusions). Resistances to the following: Statistics Reduction, Death Manipulation, Ice Manipulation, Acid Manipulation, Poison Manipulation, Electricity Manipulation, Transmutation, Magic,, and Fire Manipulation

All previous abilities plus Law Manipulation, Chaos Manipulation (Devils contribute to the balance of Chaos and Law that makes up reality; with an upset of the balance in favor of either one, severe effects take place within reality, including delusion of the minds of those aligned with the opposite force, inexplicable deaths, etc), Morality Manipulation (Merely listening to the words of a Devil can turn a target evil), Soul Manipulation (Devils are capable of sending souls to hell, though prefer evil ones, upon their death), BFR (Souls transform into a physical shell and are cast into Baator upon death), Text Manipulation (A devil imprints the soul of a corrupted target with their name automatically), Extrasensory Perception (A devil can see the state of one's soul and if another devil has claimed it), Pain Manipulation (A devil is capable of torturing and flaying the soul), Energy Manipulation (Hell is powered by divine energy drawn out from the soul via pain), Power Bestowal (All devils save Lemures can raise other devils to a higher rank, effectively giving the abilities of that rank), Reactive Evolution (Given enough soul energy, a devil can ascend to a new rank of devil, for example, a Spined Devil may become a Bearded Devil), Regeneration (At least Mid, likely Mid-High, possibly Mid-Godly; Devils can reform from their evolution to higher ranks, which often includes losing all viscera on their body, their heads cracking open; Archdevils are on the level of Demon Lords such as Orcus), Madness Manipulation (Type 3, Anyone outside of the ranks of Baator seeing their regeneration is induced with crippling fear), Absorption (A devil can absorb the energy released by a soul), Immortality (Types 1, 3, and 4; Devils will resurrect if killed outside of Baator; Many devils are older than measured time itself, including several Pit Fiends and multiple Archdevils, such as Dispater), Disease Manipulation (Those that devour the flesh of a Baatezu once killed become lethally ill), Preparation (As military geniuses, devils benefit greatly from preparation, creating traps and tricks to practically ensure victory in a given encounter), Fear Manipulation (The equipment of a Devil induces moderate fear in those around them), Self-Sustenance (Types 2 and 3), Immortality (Type 8), Necromancy, Mind Manipulation (Asmodeus' aura can force all those near him to follow his orders and by speaking Asmodeus can force another creature to follow his orders), Social Influencing, Corruption (Types 1 and 2), Extrasensory Perception (Can detect magic, see through invisibility, and magical illusions), Non-Physical Interaction, Causality Manipulation (With Wish can affect past, present, and future to achieve the desired effects), Power Bestowal (Gave the other eight Archdevils their power), Fear Manipulation, Teleportation, Power Words (Can stun, blind, or outright kill a creature by speaking), Summoning, Life Manipulation (Able to Heal and get rid of multiple negative effects with Restoration), Power Nullification (Limited to Magic with Greater Dispelling), Fire Manipulation, Creation (Can create undead), Symbols (Can force a target to sleep, be brainwashed and follow the caster, be weakened physically, get stunned, or be killed outright) Resurrection (Can resurrect other beings), Ice Manipulation, Statistics Amplification, Statistics Reduction (His Chill Gaze can slow a target down and his Fear and Weakness Gaze can heavily weaken his target's strength), Status Effect Inducement, and Omnilingualism. Resistances to the following: Statistics Reduction, Death Manipulation, Ice Manipulation, Acid Manipulation, Poison Manipulation, Electricity Manipulation, Petrification, Transmutation, Magic, Sealing, and Fire Manipulation

All previous to a much higher degree, Precognition (Greater Gods can sense anything related to their portfolios multiple weeks in advance. In Asmodeus' case his portfolio is Indulgence), Memory Manipulation (Wiped out all traces and knowledge of he who was original name, even from the knowledge of other gods who already resist mind altering effects)

Attack Potency: At least Small Country level (Defeated Zargon and should be comparable to Father Llymic), possibly Universe level+ (Solars are so powerful that even Demon Princes fear their might and Asmodeus was stated as being the greatest of all angels. Demon Princes can control the space-time of their own infinite layers) | Varies from Multi-Continent level (His avatars should be comparable to the abomination that was heating the core of a planet, laughably superior to singular adventurers with prep time) to Planet level (Capable of battling the Leviathan, which would have destroyed the world should it awaken) | At least Low Multiversal level (Control the space-time of multiple layers of the Nine-Hell. Strong enough that the Gods in the Nine-Hells respect his position) | At least Low Multiversal level (Should be stronger than his Archdevil form) | Multiversal level+ (Moved the Abyss to another section of the Multiverse. The Abyss contains an infinite amount of layersand in some editions every layer is spatially infinite) | At least Multiversal level+ (Created the multiverse with Jazirian, even while weakened his power is considered to be on the level of other Greater Gods, and is comparable to a weakened Jazirian who is considered a Greater God)

Intelligence: At least Extraordinary Genius (His intelligence rating is 30 which is superior to the Elder Brain, maintains Multiversal scale plots and is the smartest of all devils)

Note: Asmodeus’ origin is clouded in mystery and contain multiple contradicting elements. In some he is a fallen angel, in others a massive serpent who’s fall created the Nine-Hell’s, in others a Fallen God who has waited for eons to regain his divinity, and in one even the creator of the multiverse itself. As such the profile may contain contradicting information. The Avatar key shares the same power and abilities as the Lesser and Greater God keys, just on a much lower level. Also as of this profile, Asmodeus is a Lesser God after having his power reduced.