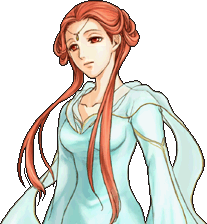 Ashunera (アスタテューヌ, Asutatyūnu) is a non-playable character from Fire Emblem: Radiant Dawn. She is a goddess and the creator of many forms of life on Tellius. The Zunanma loved her and called her the Goddess of Dawn in reference to the bright color of her hair. When the Zunanma's descendants, the beorc and laguz, went to war, she attempted to stop them. However, she lost control of her emotions and accidentally flooded all of the continents in the world except Tellius.

In order to prevent another flood from occurring, she discarded all of her emotions, which manifested as Yune, the Goddess of Chaos. She also became Ashera, the Goddess of Order, and grew distant from her creations.

One thousand two hundred years after the events of Radiant Dawn, Ashunera finally returns to Tellius and once again watches over it as the creator. She also has a conversation with Lehran in the final dialogue scene in the game.

Powers and Abilities: Superhuman Physical Characteristics, Weather Manipulation, Creation, Immortality (Type 1), Regeneration (Mid-Low), Water Manipulation, Separation, Shapeshifting, Energy Projection, Light Manipulation, Can Bless others with her powers, Petrification, Self-Resurrection and Invulnerability (Can only be harmed and killed by weapons blessed by the goddesses), Can Summon spirits with elemental powers (Of the fire, lightning, and wind variety) to aid and heal her auras, Forcefield creation (Via Auras), Limited Attack reflection (Via Aurora), Teleportation, Possession, Regeneration (Low) (Via Mantle), Intangibility, Mind Manipulation, Power Nullification (Via Mantle), Can inflict paralysis and make magic users unable to use magic via Judge, Non-Corporeal, Soul Manipulation and Non-Physical Interaction (Can create and destroy souls)

Speed: At least Massively Hypersonic (Superior to Ike, who matched Ashera, who was considered to be around half of Ashunera´s true power)

Durability: At least Multi-Continent level (Superior to her incomplete self, Ashera)

Intelligence: Gifted (Creator of all life in Tellius)

Weaknesses: Possibly weak to her own powers. (Ashera was easily weakened by a Yune-Powered Ragnell)