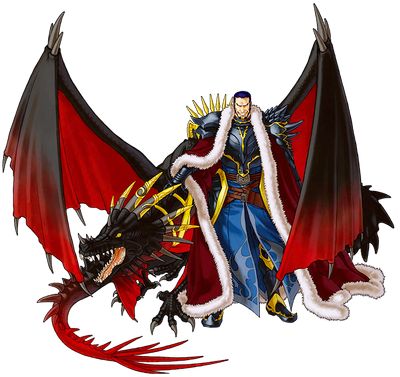 Ashnard, also known as the Mad King, is the 13th King of Daein and the main antagonist of "Fire Emblem: Path of Radiance". He wields the wicked sword Gurgurant, and his mount is the twisted body of Rajaion, the Black Dragon prince of Goldoa.

Powers and Abilities: Superhuman Physical Characteristics, Expert swordsman and axe user, Energy Projection, Air Manipulation (via Sonic Sword), Light Manipulation and Absorption (via Rune Sword), Genius at combat strategies, Healing (Via Renewal), Invulnerability (Can only be harmed by weapons blessed by the goddesses), Statistics Reduction (via Daunt), Flight, Non-Physical Interaction (Can kill souls), Non-Physical Interaction (Can harm Non-Corporeal beings by gaining god-like power from Medallion), Breath Attack with Rajaion, Resistance to Madness Manipulation (Was still in control despite touching Lehran's Medallion, which causes most humans to trade all of their sanity for greater might)

Attack Potency: Small City level (Fought against Ike and shouldn't be weaker than Black Knight) | At least Small City level (By being consumed god-like power from Medallion, he gained an incredible power up. Which made Ike need help from battalion commanders to defeat him)

Stamina: Superhuman (Should be comparable with Ike and Black Knight.)

Range: Extended melee range with swords and axes. Tens of meters with Gurgurant

Intelligence: Gifted (Even before becoming king, he was a great warrior who was able to almost single-handedly grant victory to Daein in a minor conflict between Daein and Begnion. He is also very manipulative and treacherous; he plotted to kill all the royal family to become king, used his own son as bait to capture rajaion and turn him into his slave)

Weaknesses: Overconfident, trusts people according to their strength, allowing anyone strong enough to infiltrate his ranks. Rajaion is especially vulnerable to electricity and dragonslaying objects.