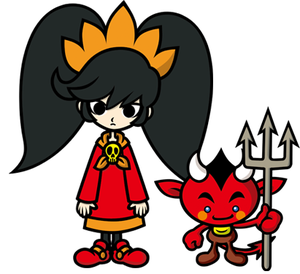 Ashley is a young witch who lives in a haunted mansion in Diamond City. She often takes trips outside her mansion to train in magic, and frequently thinks about her parents. She's is quite shy, distant, and wanted more friends. Red is a shapeshifting imp who acts as Ashley's best friend and loyal assistant.

Attack Potency: Building level (Her lightning magic is powerful enough to instantly vaporize flying cookies roughly her size, which requires power greater than that of a natural lightning bolt). Multi-City Block level using a lightning orb (She can hold three at most, but likely has that many on her after the events of Game & Wario).

Speed: Likely Relativistic (They flew all the way to the moon in four seconds while Red was in broom form. However, the Moon was shown as just slightly larger than Ashley)

Stamina: Average (Both are pretty lazy and Red is exhausted from flying to the moon and trying to catch Orbulon on foot)

Intelligence: Average (Red has shown multilingual capabilities when speaking with a demon who spoke in a groan-based language Ashley didn't understand)

Weaknesses: Ashley seems to have a raging superiority complex and a burning inferiority complex at the same time. Ashley and Red rely on each other very heavily yet are both quite lazy and clumsy. Ashley's spells only work 40% of the time (Game and Wario's Ashley character card).