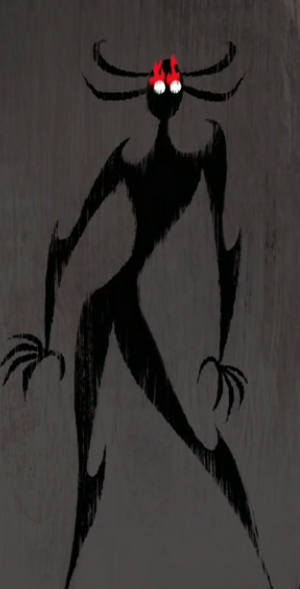 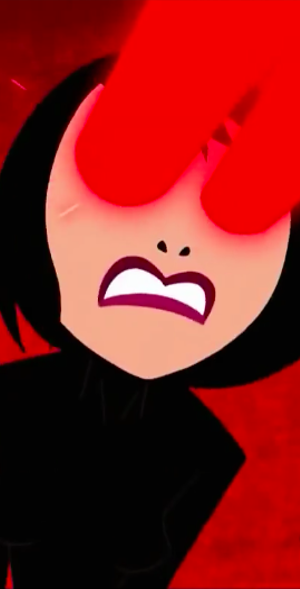 Ashi is a main character in Season 5 of Samurai Jack. She was born in a set of septuplets to the "Daughters of Aku", a demonic cult which devotes their lives to pleasing Aku, who they view as their benevolent god. They also believe that Samurai Jack is the one who plunged the Earth into the hell-like, apocalyptic state it's in. And thus are determined to kill him at all cost.

Unlike her six siblings, Ashi has shown far more compassion and emotion. Often longing to experience the rare beauties of nature and befriend the animals that live in it. This would upset Ashi's mother, who viewed her children as nothing but mindless, heartless killing machines meant only to serve Aku.

Through years of torturous training Ashi has become among the deadliest warriors on the planet, but is defeated by the one she thought she was destined to kill, Jack. After reluctantly having her life saved numerous times by the samurai, she starts to question if Jack is truly the evil monster she's been taught all her life to believe he is.

Eventually she sees the truth of the world and drops her mother's teachings all together. Becoming a loyal ally of Jack's and even saving his life. Now she is determined to free the world from Aku's grasp alongside the samurai. And starts to develop a romantic relationship with him as time goes on.

Later it's revealed that Ashi's mother became pregnant with her and the sisters through drinking a potion made by Aku. Which granted Ashi some of Aku's DNA inside of her. As a result, Aku is able to control Ashi's mind and body against her will. Forcing her to fight Jack on his behalf. In order to not get in Jack's way of their quest, Ashi begs Jack to kill her, to which the samurai refuses.

After a while she manages to break out of Aku's grasp. Now able to freely use her new powers from Aku, she tore open a portal in time, and sent her and Jack to the past. This allowed the samurai to finally kill Aku once and for all, although at the cost of Ashi's existence, as without Aku, she would have never been born.

Despite never truly existing, Ashi's memory lives on through Jack, giving him the strength to go on.

Attack Potency: Small Town level (Although inferior to Jack, she is able to somewhat hold her own against and harm him. Notably, by Season 5 Jack is far stronger than his past self, as he destroyed the most powerful Beetle Drone ever created with one casual attack. She and her sisters are considered by Jack to be among the most dangerous opponents he has ever faced. Ashi was stated by her mother to be the strongest sister) | At least Country level (After mastering her abilities, she was able to briefly match Aku in direct combat and was stated to possess all of his powers)

Striking Strength: Small Town Class (Stronger than one of her sisters, who harmed Jack with a knee strike) | At least Country Class

Durability: Small Town level (She and her sisters were able to survive multiple hits from Jack) | At least Country level (Blocked multiple attacks from Aku without any damage)

Stamina: Very high (Defeated a whole army by herself and then went on to fight and defeat her mother)

Weaknesses: Arrogant, stubborn and prone to fits of rage when angered. To some degree severely lacks knowledge of the outside world due to several years of isolation with the other Daughters of Aku, to the point where they didn't understand the meaning of two animals loving each other. Was taught not to assist her sisters in combat and to dismiss their deaths as their failure. However of episode XCVII, those weaknesses seem to no longer apply. Due to sharing Aku's DNA inside of her, Aku is able to mind control Ashi and force her body to do things against her will. Albeit she can resist Aku's control with extremely large difficulty.