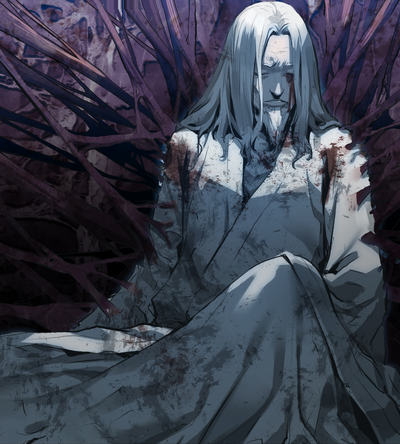 Ashhart is the main antagonist of the manhwa, Trinity Wonder

As the teacher of Emily, he wields great power in their World, holding the title of the Grand Magician for his prowess

To protect Emily from the Dragon Soul, he gifted her a Spirit Stone which would absorb the flow of Mana around her to stop the Dragon Soul from turning her into a Dragon

Weaknesses: Enough accumulation of Mana will turn him into a Dragon | Needs Mana to utilize his spells and vulnerable when using Eternal Twilight and while preparing The Storm of Rupture

Magic: Can use Magic

The Storm of Rupture: Initiates Eternal Twilight by using up his Mana, gathering Energy around him, then releasing a gust of wind after some time passes

[The Storm of Rupture] Eternal Twilight: Turns the Energy around him into Darkness itself, expanding it until it'll its size is enough to swallow and destroy a Continent

Teshub's Wrath: Calls a gigantic lightning bolt from above to hit the target

Dragon Fear: Utilize Mana to instill fear to his opponent by roaring

Dragon Breath: Lets out a breath of energy towards his opponent

Flight: Can fly with his wings

Forcefield: Creates a forcefield around him using his Mana

Heal: Heals the target of their wound

Note: To see the reasons for his Powers and Abilities, check this blog and scroll down to the 'Explanations (Optional)' section

Retrieved from "https://vsbattles.fandom.com/wiki/Ashhart?oldid=5365294"
Community content is available under CC-BY-SA unless otherwise noted.