VS Battles Wiki
Register
Don't have an account?
Sign In
in: A House of Many Doors, Weapon Masters, Immortals,
and 16 more 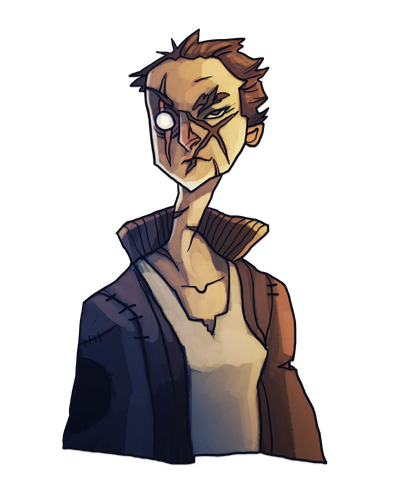 Ashen is one of the many potential crew members who aid the captain on their voyage. She fills the role of Guard Captain during her time. Her quest is to kill the perennials, in particular, the one who goes by the name G.

However, should the kinetopede captain follow the Death's Justiciar route, and hunt down all of the known perennials in the house, she plays a much greater roll. Before the game, she was the Guard Captain of the Govener's crew, and became a Perennial with the rest of the main crew. She functions as the final boss for this route of the game.

Tier: At Least 9-B, likely 8-B. Low 2-C with preparations. Unknown via Golden Bullets

Origin: A House of Many Doors

Powers and Abilities: Superhuman Physical Characteristics, Weapon Mastery, Martial Arts, Stealth Mastery, Immortality (Type 5, All Immortals in A House With Many Doors are naturally separated from Lady Death. In addition to this, she has an immortality most similar to Type 8. Unless a perennial is killed by themselves, they are nigh impossible to kill; In essence, they are reliant on the absence of their suicide), Resistance to BFR (Unable to leave The House), Pain Manipulation and Reality Warping (Her Grit level allows her enough resistance to the effects of the unstable reality of the Mirror Wise to properly navigate them. They also allow her to ignore pain to a high degree). Probability Manipulation, Death Manipulation, Fate Manipulation, Durability Negation, and Future Manipulation via Golden Bullets (Golden Bullets kill all possible futures where the target survives). BFR, Mirror Manipulation and Dimensional Teleportation via Fetch Mirrors (Fetch Mirrors can be used to teleport themselves and others into dimensional mirrors, and via careful manipulation can be used to move long distances in short periods of time). General Resistence to Occultism and Supernatural Abilities and Phenomena (such as Soul Manipulation, Possession, Reality Warping, Physics Manipulation, Existence Erasure, Spatial Manipulation, Time Manipulation, Curse Manipulation, Status Effect Inducement, Mind Manipulation, etc.) via Warding Iron.

Attack Potency: At Least Wall Level (Can defeat Penpusher, a shark, with ease), likely City Block Level (Can take on the entire crew, including multiple Guard Captains and Peter McNally. Equal to if not greater than an End of Game Kinetopede Captain in physical combat, who can have Graft Levels in the several hundreds. Likely comparable to The Governor and other members of her crew). Universe level+ with preparations (Given a great deal of preparation, time, and help, she is capable of reaching The Orchard and causing the destruction of a universe via eating an apple). Unknown via Golden Bullets, as they Bypass Conventional Durability

Speed: At least Massively Hypersonic (Should be comparable to The Kinetopede Captain and other members of the Governor's Crew, who are capable of reacting to Kinetopede weapons before they reach their ship at point blank range. High end Kinetopede are capable of circumventing a star in 2 days)

Durability: City Block Level (Superior to other guard captains and can take on the rest of the crew. Should be comparable to if not greater than an un-enhanced End of Game Kinetopede Captain. Can tank the explosion of a Kinetopede and hits from Kinetopede weaponry. Each car of the Kinetopede is the size of an extremely large building, and can have many cars per train)

Intelligence: High, possibly Genius (Had a longstanding plan to kill an otherwise unkillable being)

Note: As a Perennial, Ashen is physically incapable of leaving, or being removed from, The House. Thus, all VS Battle locations should be adjusted and accounted for.

Ashen One (Dark Souls) Ashen's Profile (Both at 8-B, Golden Bullets weren't allowed, and speed was equalized)