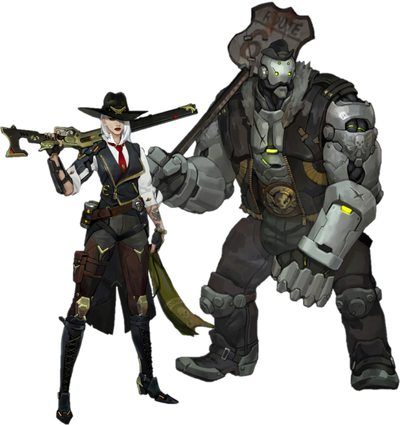 Ashe is the ambitious and calculating leader of the Deadlock Gang and a respected figure in the criminal underworld.

Born into a wealthy family, Ashe grew up surrounded by privilege. Her parents were highly sought-after business consultants and coaches for powerful CEOs around the world. Though her parents paid little attention to her (mostly leaving her in the care of the family’s omnic butler, Bob), they ensured that Ashe had every opportunity to succeed. But a chance meeting with a local ruffian named Jesse McCree, and an impromptu string of crimes committed together opened her eyes to her true calling. The satisfaction of outwitting her targets and the thrill of getting away with it set her on the outlaw path.

Along with the other three founders of the Deadlock Gang, Ashe started to make a name for herself with bigger and more extravagant heists. The Deadlock Gang’s rapid rise to prominence put them at odds with the other criminal organizations in the American Southwest; the encounters often became violent. After years of battles and bloodshed, Ashe called the heads of the major groups together.

Ashe saw the potential to grow the influence of all. She used what she’d learned from her parents’ business to bring order to these groups. She proposed that the gangs could work together (or at least, not work against each other). Her principles: keep your word, don’t work with the law, respect each other’s territory, and always punish betrayal.

No longer having to focus her energies on quarrels with the other gangs, Ashe is now writing her name across the American Southwest with a string of audacious heists and operations that have put her at the top of the authorities’ most-wanted lists and cemented her legacy as an outlaw legend.

Attack Potency: Small Building level (Able to deal significant damage to other heroes with her explosives, and can damage McCree with her bullet fire. Grew up with and made a name for herself alongside the gunman)

Speed: Subsonic with Hypersonic reactions and combat speed (Alongside B.O.B., she can keep up with Mcree, and reacted to bullets fired by him)

Stamina: Above Average (As the leader of the Deadlock Gang)

Intelligence: An expert marksman with years of combat experience behind her. Successfully united various crime organizations under the Deadlock Gang and led numerous successful heists alongside McCree. For a time, the Deadlock Gang was considered a threat by the international organization of Overwatch in its prime. Presumably upgraded her family's robotic butler with various offensive munitions.

Weaknesses: Somewhat overconfident. Her rifle's accuracy and the damage are reduced while it isn't scoped and has a relatively long reload time compared to other heroes.

Retrieved from "https://vsbattles.fandom.com/wiki/Ashe_(Overwatch)?oldid=6609201"
Community content is available under CC-BY-SA unless otherwise noted.