VS Battles Wiki
Register
Don't have an account?
Sign In
Advertisement
in: Tier 9, Tier 9-B, Characters,
and 31 more 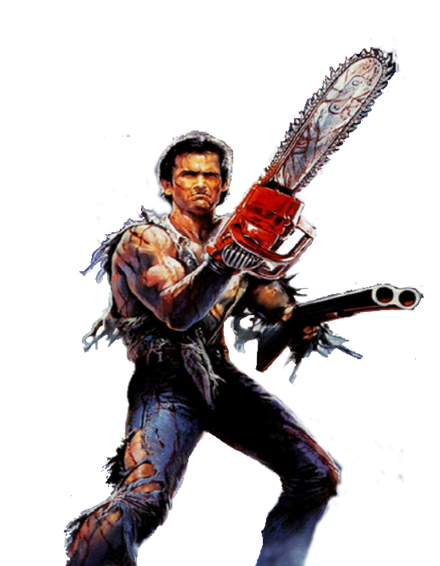 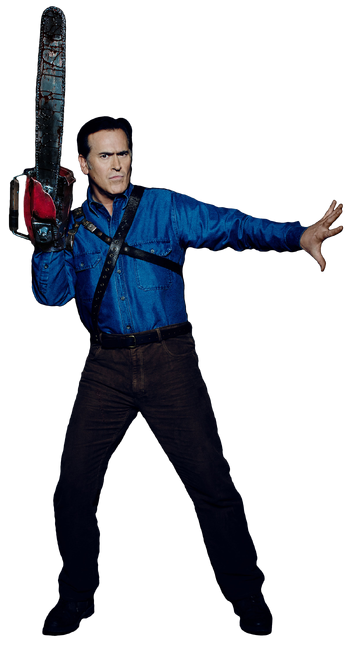 After a trip to an old cabin in the woods with his girlfriend, Linda, goes wrong, Ashley Joanna Williams, better known as Ash, has no choice but to kill her when she is possessed by the Kandarian Demon, becoming an unlikely and reluctant hero as it falls to him, again and again, in both the past and present, to fight against the Evil Dead.

Tier: 9-B, higher with Mechanical Gauntlet

Powers and Abilities: Superhuman Physical Characteristics, Expert Marksman and Unarmed Combatant, Vehicular Mastery, Acrobatics (Capable of performing this), Preparation (Formed a plan to take on an army of Deadites, which involved making gun powder with the guidance from few textbooks, training medieval soldiers, and creating the Battle Car, a modified 1973 Oldsmobile Delta 88), Supernatural Willpower (He was able to survive nearly 2 days in the cabin, resisting extreme physical and mental torture in the process, was able to strangle a possessed Kelly even when unconscious, was able to ressist possesion and was also able to resist Baal's attempt to control his mind), Instinctive Reaction (Killed Eligos without thinking), Limited Body Control (Could reshape his skull after being extremely stretched), Possibly Low Regeneration (Had the flesh ripped from his leg in the first film but was fine by the second movie which takes place in less than a day after the first one, his stump stopped bleeding just moments after cutting his hand off, he was also able to quickly recover from the damage that Eligos did to his Brain and Neurons), Resistance to the following: Dream Manipulation (Prevented Eligos from controlling his dream), Mind Manipulation (Baal a demon capable of controlling anyone's mind, couldn't control Ash's mind), Possession (Was able to ressist possesion), Heat Temperatures (Was able to drink a teapot full of boiling water twice), Pain (Gets constantly beaten by Deadites, was able to keep running after crashing his car and hitting his head on the ground, severed his own hand with a chainsaw and did not demonstrate any signs of pain moments later, pierced his own leg with a scissor and simply shrugged off, was able to keep fighting against Baal even after having his hand severed again). Has Durability Negation with Kandarian Dagger and Dimensional/Time Travel with Necronomicon

Attack Potency: Wall level (Has slain and killed Deadites that can punch through wooden walls. Held a door against the Kandarian Demon, who has split apart trees and flipped over cars. Broke out of a Deadite-possessed Doctor's grip, who could punch through a metal table), higher with Mechanical Gauntlet (Superior to his normal arm. Casually crushed an iron goblet, has easily overpowered and killed multiple Deadites with it, and it held against a sword wielding Evil Ash). Ignores conventional durability with Kandarian Dagger

Speed: Superhuman (Outran The Kandarian Demon that was gaining on him while Ash was on horseback, and has kept up with a car) with Supersonic combat speed and reactions (Can dodge his own boomstick shots fired at him, and can keep up with the Deadites, who are also capable of reacting to the shots of Ash's boomstick)

Lifting Strength: Class 5 (He was able to contain the strength of the Kandarian Demon, who is capable of overturning cars)

Striking Strength: Wall Class (Busted right through a wooden door without effort, has punched through Deadite Skeletons and even broke one's spine with a backbreaker), higher with Mechanical Gauntlet

Durability: Wall level (Survived being thrown through a wooden staircase, can charge right through a wooden door without any injuries, lived after being thrown through a stone wall. Withstood being thrown several hundred feet into a tree by the Kandarian Demon. Should be comparable to Evil Ash, whose skull tanked a point-blank shotgun blast, with it only dislocating his jaw and blasting the skin off of it), higher with Mechanical Gauntlet (Has easily blocked blows from a sword-wielding Evil Ash)

Range: Extended melee range with his chainsaw, longer with his boomstick

Standard Equipment: The Mechanical Gauntlet, a modified Homelite XL Chainsaw attached to the stump where his right hand used to be, his "boomstick", a sawed off 12-gauge double-barreled Remington, flamethrowers, Winchester Model 1892 lever action rifle, the Necronomicon (sometimes), Kandarian Dagger

Intelligence: Gifted (Has decades of knowledge and experience of fighting Deadites. Very good mechanical knowledge, such as creating his own mechanical han. Has presented the ability to quickly adapt to situations to ensure his own survival in battle. Capable of modifying a 1973 Oldsmobile Delta 88 into a battle vehicle only using materials from 1300 A.D. and the few materials left in the trunk of the car)

Frank West (Dead Rising) Frank's Profile (Frank West only had his 9-B weapons, Ash had the Book of the Dead, and Speed was equalized)