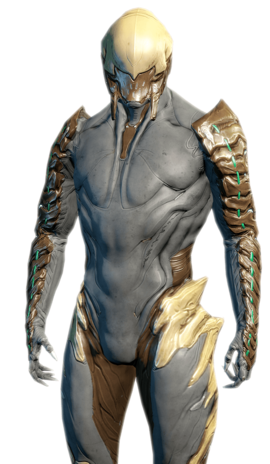 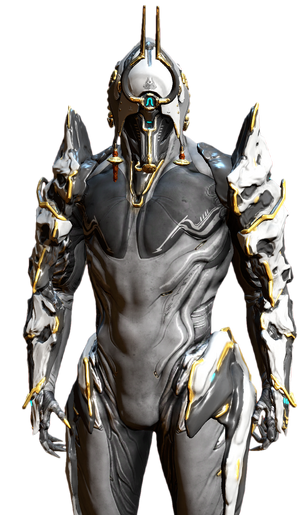 Ash is the ninja-themed Warframe, deadly and swift, he is capable of dropping dozens of targets in a matter of seconds.

Much like all Tenno, he is led by The Lotus, a mysterious figure whose motive is to preserve their kind.

Powers and Abilities: Superhuman strength, speed, durability and agility, Immortality (Type 1, 2, 3, 4, 7, 8 and 9, The Tenno are souless meat puppets for The Operator who manipulate them from afar, and being able to create copies when they are destroyed), Energy Manipulation, Weaponry Master, Stealth Mastery, Regeneration (Mid), Invulnerability (Through various abilities and mods the warframes are capable of full invulnerability to any kind of damage, ability or status effect), Passive Gravity Manipulation, Information Analysis, Extrasensory Perception, Paralysis Inducement, Heat Manipulation, Healing, Attack Reflection, Resurrection, Forcefield Creation, Explosion Manipulation, Statistics Amplification, Technology Manipulation, Supernatural Luck, Resistance to Status Effect Inducement (And many others via their companions), Corrosion Inducement, Electricity Manipulation, Explosion Manipulation, Air Manipulation, Energy Projection, Durability Negation, Phasing (Using various weapons), Resistance Negation (The Void energy the operator's use can completely strip a being of their resistances and adaptations. Furthermore all warframe abilities use the same void energy and as such negate any attempt to adapt to resist their effects), Adaptation (Warframes grow extreme resistances to whatever is used against them through various mods. This extends to most status effects, damage and/or sometimes even durability negating weapons), Information Manipulation, Data Manipulation, BFR and Deconstruction via Synthesis Scanners (Synthesis scaners can be used to deconstruct an entity into data and send it to Cephalon Simaris to store it in the form of information), Absorption (Can absorb and capture any entity by deconstructing it into information), Non-Physical Interaction (They can freely physically interact with elements, energy, and through the use of void energy they can even interact with souls), Dimensional Travel and Spatial Manipulation (Void energy and warframe abilities are completely unaffected by dimensional boundries and are capable of affecting the outside even when inside Limbo's cataclysm or banish), Reactive Evolution (Grow stronger and their abilities become more effective with time), Absorption (Can aborb all incoming damage of any kind and use it to power up), Homing Attack, Summoning, Gravity Manipulation (Can repell anything that comes close including matterial objects), Empowerment, Teleportation, Forcefield Creation, Invisibility, Healing, minor Smoke Manipulation (Using Archwing), Aura, Statistics Reduction (Damage, shield, armor, speed, accuracy and more), Statistics Amplification (Damage, shield, health, armor, strength, speed and more), Limited Probability Manipulation (Capable of increasing the chances of status effects), Extrasensory Perception, Reactive Power Level (Increasing energy), Healing, Power Bestowal, Resistance to Poison Manipulation (Through the use of various auras), Through various mods warframes gain Elemental Manipulation (all elements in adition to corrosive, magnetic, poison, blast etc etc), Resistance to many status effects and abilities, Damage Boost and Damage Reduction (both to insane amounts. Capable of increasing their damage several thousands times over, this boost can sometimes even go in the millions or billions. Capable of reducing all incoming damage which includes several stacking mods capable of easily going over 99% damage reduction even without a specific build or abilities), Electricity Manipulation (Shocks anyone who makes contact with the warframe), limited Probability Manipulation (Can increase the chance for certain events to happen such as inducing status effects, critical chances, enemy detection chance, the chance to be unaffected by a knockdown, each of them capable of going to 100% chance), Passively Reflects all incoming damage to the attacker, Hacking (Capable of hacking through high security and high tech doors, hacking robots and even casually hacking some of Corpus' greatest killing machines and bosses), Resistant to (Heat, Electricity, Poison, Cold, Radiation), Skilled Martial Artist, Dimensional Travel (Can effortlessly get out of the rift, however he cannot go into the rift unless Limbo sends him there), Duplication (Via Specters and Blade Storm), Levitation and Pseudo-Flight, Energy Projection, Energy and Life Absorption, Team Invisibility (His smoke screen can make him and warframe nearby invisible), Teleportation, Damage Boost using Fatal Teleport argument (Teleporting to an enemy deals a finisher with increased damage), Immunity to Soul Manipulation (By virtue of lacking a soul) and Mind Manipulation (While it is possible to manipulate the Tenno, the warframes themselves are mindless and the only way to control them would be through void energy)

Speed: Massively Hypersonic (Can fight evenly against Volt), possibly Relativistic+ or higher reactions/combat speed (Can deflect weapons such as Opticor and Glaxion at a close distance, the former stated to be able to fire a blast of "light energy"), vastly improved attack speed via teleportation (Ash will consistently teleport around his target and into some of his strikes, typically performing this during his Blade Storm ability) | Massively Hypersonic, at least Relativistic+ or higher reactions/combat speed (Superior to their normal counterparts)

Range: Extended melee range; can be extended to a certain amount with mods, hundreds of meters with most ranged weaponry, 60 meters with Shuriken, stagger radius of 25 meters with Smoke Screen, 150 meters with Teleport, 62 meter attack radius with Blade Storm

Standard Equipment: Various types of Grineer, Corpus, Infested, and Tenno weaponry, but is limited to one large weapon, a sidearm, and a melee weapon at a time during missions, along with his hidden blades

Defensive Mods: These mods are capable of increasing the effective defense not through increasing durability but rather through trickery. Some mods are capable of giving warframes the ability to passively electricute anything that comes close to them, paralyzing them in the process, while some others make the warframes passively reflect all incoming damage back to the attacker.

And these are just the tip of the iceberg, the amount of mods in warframe exceeds 1000, though it is impossible to mention them all, for more info check this .

Djinn: A sentinel capable of pulling opponents towards it's master and even self-resurrect.

Helios: A sentinel that specialises in analyzing everything about an opponent deducing it's weakpoints and strong points with a mere scan, it can also show the body weak points of any suit or physical body.

Diriga: A sentinel specialising in siniping opponents from a distance, dealing massive damage sometimes even comparable to the warframe or weapons. It is also capable of continuously zapping targets paralyzing them.

Amesha: An Archwing that focuses on defense and healing rather than offense. It's abilities include Homing Attack Negation (Deploys dornes that intercept all enemy fire), Absorption and Healing (Creates beacons that absorb all damage and turn it into healing pulses instead), Heat Manipulation and Resistance to Status Effect Inducement (Makes every member of the team immune to status effects and slows down enemies), Empowerment (Absorbs all incoming damage and turns it into energy, furthermore every ability gets enhanced stats like range, duration and power).

Elytron: An Archwing focusing on offense. It's abilities include launching bullets, missiles and distraction.

Itzal: An Archwing focusing on trickery. It's abilities include Invisibility, Summoning (Can summon drones to fight), Teleportation and Gravity Manipulation (Sucks in anything by creating a miniature black hole which then collapses dealing damage).

Warframes are equiped with different items and gear to help them in battle. Including but not limited to:

Specters: Specters are exact replicas of something. Specters can be used to fight along side the warframes, and can be replicas of themselves or any other warframe or even replicas of enemies. Specters can be pre-made to be used in battle and creating specters of enemies will allow the specter to copy it's entire arsenal and use all of his powers, however creating specters of enemies would require full information regarding that specter, information that can only be aquired through scanners.