VS Battles Wiki
Register
Don't have an account?
Sign In
Advertisement
in: Tier 2, Tier 2-A, Characters,
and 54 more 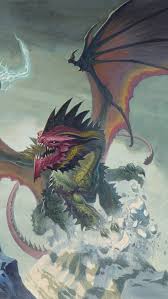 Asgorath is a Primordial Dragon Deity that is regarded to have created all of Dragonkind and the multiverse itself. Asgorath encompasses all alignments and is symbolized with Totality, Balance and Peace. He is more commonly known as Io in the Outer Planes

Gender: Referred to mainly as a Male, occasionally as a Female

Attack Potency: Multiverse level+ (Created the Infinite Multiverse in some myths, should be comparable to other Greater Gods like Gruumsh)

Speed: Infinite (Vastly superior to time deities beneath him, able to control the space-time of his own Realms)

Range: At least Multiversal via having influence over all Dragonkind

Intelligence: Vast, knows all outcomes of every dragon and implied to have knowledge over all magic items in existence and the future

Notable Attacks/Techniques: Can utilize any Attack or Technique of any Dragon

Note: Much of Asgorath is unknown with much of the info listed here only declared to be as myths in the Dungeons and Dragons multiverse. Nonetheless, this page utilizes all these myths one way or another without trying to be contradicting and does so given the limited information.

Nicol Bolas (Magic: The Gathering) Bolas' Profile (2-A versions were used and speed was equalized)