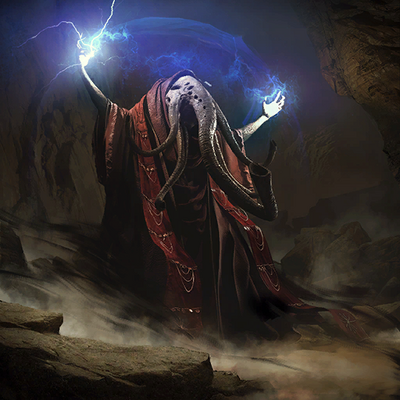 Ascended Sleepers, also called Ash Poets by members of the Sixth House, are half-Dunmer, half-beast creatures created by the dark magic of Dagoth Ur. Sleepers are intelligent, aggressive and dangerous to all but the most experienced of travelers, hurling powerful Destruction spells at their foes. Their bone structure appears to consist of a skull only because when one is killed, only the skull remains.

Note that despite being called "monsters", these creatures are not actually undead and contrary to most social commentaries, they are immortals powered by the Heart of Lorkhan. They are highly intelligent, aggressive, and dangerous. Importantly, they are capable of using magic and other powers deriving from the presence of Lord Dagoth Ur himself. However, Ascended Sleepers are way more powerful than Ash Ghouls or other generic creatures infected by the Blight. The Sleepers are the most experienced fighter, and possibly the dreamers having the closest access to the Heart of Lorkhan.

Powers and Abilities: Superhuman Physical Characteristics, Immortality (Type 3-4. Corprus grants high regeneration and immortality in both physical and possibly in mental sense via "Dreams" from Dagoth Ur), Extrasensory Perception (Ash creatures are directly powered by Dagoth Ur's presence, so their "dreams" or visions are extraordinary beyond any person on Tamriel), Magic, Reality Warping (All magic brings changes in reality according to the caster's whim), Soul Manipulation (Can use Soul Trap, which causes the soul of whatever target the creature kills to be trapped within a Soul Gem he carries, which would be sent to the Soul Cairn if used to enchant/enhance an object. Ash creatures here can sacrifice the souls to Lord Dagoth Ur instead), Statistics Amplification, Status Effect Inducement, Statistics Reduction, Empowerment (All ash creatures are directly powered by the Heart of Lorkhan and Dagoth Ur himself), Mind Manipulation (Have Blight-type attacks that can drain the intelligence and mental stability of their victims. Dark magic of Dagoth Ur can also do the trick), Disease Manipulation (They can cast toxic and pestilence spells like Toxic Cloud. Additionally, they are active carriers of Corprus who spread the "blessing" among unfortunate victims), Healing, Forcefield Creation, Energy Manipulation, Elemental Manipulation, Paralysis Inducement, Resistance to Reality Warping and Magic

Attack Potency: At least Town level (Ash creatures can easily vaporize fully grown men with destruction spells. However, Ascended Sleepers are the most powerful ash creatures in Morrowind for having access to high-level destruction spells like Fire Storm and Frost Storm, which are mostly mastered by Master Mages or Wizards. Their powers should be comparable to Master Mages as described to be capable of destroying entire armies with firestorms or minor Mages capable of conjuring storms to almost destroy towns. Note that Ascended Sleepers are very limited in numbers, and they serve as high ranking lieutenants of Dagoth Ur's armies), likely higher (Dagoth Ur empowers and blesses his followers with the Heart of Lorkhan and his dreams. In fact, Dagoth Ur commanded his followers to successfully defeat three living gods of the Tribunal during their annual pilgrimage to the Red Mountain, where Dagoth Ur seized the tools of Kagrenac from Sotha Sil), some of their spells can ignore durability

Speed: At least Subsonic combat and reactions (Ash creatures can anticipate and react to spells cast by other mages and warriors, such as Redguards who can avoid arrows). Massively Hypersonic+ attack speed with shock spells and other magical attacks (Can cast shock spells, which function mechanically the same as natural lighting)

Lifting Strength: At least Peak Human (The Heart of Lorkhan grants them super strength like this )

Durability: Large Building level (Ash creatures have battled endless waves of warriors and mages sent by the Tribunal, and yet these creatures still emerge more resilient than ever)

Stamina: Immortal. The ash creatures do not feel tired or exhausted, and they are ageless.

Standard Equipment: Assorted selection of clothing if they still choose to wear them. Any Morrowind-type weapons that they pick up along their raids across Vvardenfell.

Intelligence: Insane and Gifted. Ash creatures appear to be insane and incoherent in their speeches as they make statements impossible to prove or lunatic ravings. However, they are very intelligent of being able to communicate all of their fellow ash creatures and Dagoth Ur via "dreams", similar to a hivemind. They discover the newfound awareness and a deep understanding of the Aurbis unbound by linear time like what Dagoth Ur discovered and thought after tapping into the Heart. They share a similar intelligence with their master and god, but they are also lunatic like him as the result.

Retrieved from "https://vsbattles.fandom.com/wiki/Ascended_Sleepers?oldid=4661088"
Community content is available under CC-BY-SA unless otherwise noted.