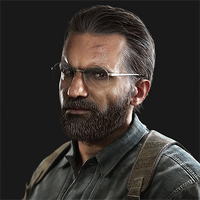 Asav was a ruthless warlord, and the leader of a group of rebel insurgents, hailing from India. He serves as the main antagonist of Uncharted: The Lost Legacy.

Attack Potency: Small Building level (Easily overpowered both Nadine Ross and Chloe Frazer on his lonesome with the former having defeated an Uncharted 4 Nathan Drake).

Durability: Small Building level (Even with the combined efforts of Nadine and Chloe, it took them a ridiculous amount of time to just pin down Asav)

Intelligence: High (Led an incredibly-successful rebellion. Asav is brutal and efficient in hand-to-hand combat, easily overpowering both Chloe and Nadine fighting him as a cohesive unit. Asav's restricted and controlled fighting stance comes across as barely held together, his sadistic tendencies simmering just beneath the surface. It isn't until the finale where he's backed up against a wall that Asav bears down on Chloe and Nadine with his full strength)

Retrieved from "https://vsbattles.fandom.com/wiki/Asav?oldid=6222478"
Community content is available under CC-BY-SA unless otherwise noted.